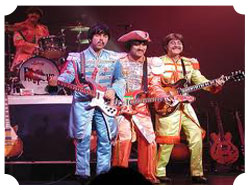 (Guest Review by Madeline Bocaro)Having always been cynical about Beatles cover bands, I was initiated with a free ticket to see the amazing Fab Faux at their 10th anniversary concert at Radio City in 2008, and was blown away. Once again a ticket came my way, this time for The Fab Four.


Comparing the Four to the Faux is like comparing apples to apple pie, but the 4-piece Fab Four had one thing that the Faux in their orchestral numbers lacked…Ed Sullivan! Old Ed introduced the band, looking exactly as he did on February 9, 1964. His corny jokes, exaggerated hunch and wave were classic! Ed read aloud the telegram from Elvis and The Colonel to ‘the boys’ and exclaimed, ‘they are all fine youngsters’.
I was disappointed when the Fabs emerged in Sgt. Pepper garb, lamenting that Ed’s cameos would be no more. However, to my delight, Ed continued to appear throughout the show, at utterly inappropriate times, joking and revving up the crowd! I loved his Richard Nixon impression! The Fabs’ costume changes - Nehru suits to Pepper uniforms, to Abbey Road album cover attire were timeless (John’s white suit recently sold at auction for $46,000 in January, 2011) - but gray-suited Ed was a surreal and hilarious apparition. He reminded me of the Ramones’ Pinhead mascot!
I now realize that a Beatles cover band – especially a touring one, cannot be too bad. The fans obsessively scrutinize every subtle nuance, so these bands must be technically and historically correct. The Fab Four were loyal to the original sounds. In one more comparison to the Faux, the Four used synthesizers to achieve orchestral sounds, whereas The Faux employ a real orchestra and exact instruments. However, the Four were all the more impressive due to their limitations.
The ‘Penny Lane’ piccolo trumpet solo (R.I.P. David Mason, who passed away last month at age 85) was very good, as was the orchestral ascending scale rave-up on ‘A Day In The Life’. They adequately achieved John’s distorted varispeed vocals and loopy sounds on ‘Strawberry Fields Forever’.
The background archival films of screaming fans and vintage Liverpool footage upped the nostalgia. The guys took it further, mimicking the Beatles’ cheeky banter. It was amusing at first, but Paul’s corny, relentless lines (‘Clap those hands!’) and lame jokes became extremely annoying. Of course, the guy was just doing his job. He can’t help it if Paul is corny and annoying (Obviously NOT my favourite Beatle!)
‘George’ (who really hailed from Liverpool) was a bit too friendly, but his Gretch sounded glorious. ‘Ringo’ was great, but obviously not as effortless and cool as the original with his perfect hits and symphonic fills.

‘John’ was incredible. His voice, mannerisms and multi-tasking on several instruments simultaneously were remarkable. A beautiful spoken tribute and chilling version of ‘Imagine’ was a nice touch.
The creepy old ornate St. George Theatre resembled a place that the Beatles would have actually played, so that was quite eerie. The show was a much better alternative than the end of the world, which was scheduled for that very evening. So there’s a nice compliment for the Fab Four!
Posted by Roctober Productions at 7:23 AM