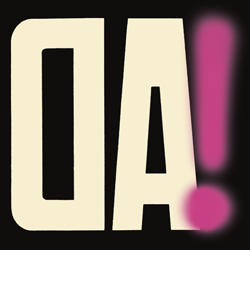 (Factory 25) Of Chicago's early punk bands DA is one of the most interesting although theoretically they shouldn't be. Chicago's early 80s bands tended to be cerebral (even when Bondi tried to be a meathead it was brainy, smart meat). Obviously Chicago was on the verge of an Industrial revolution in the 80s, so being dark was par for the course. And having a poet's soul like vocalist Lorna Donley was nothing special in the town that spawned poetry slams and Algebra Suicide. Yet somehow the band (much more convincingly in this full LP of unreleased recordings as opposed to the 1982 single I'd previously heard) manage to make smart, dark, poetic punk/post-punk really resonate with spooky rock 'n' roll power. And contrary to rumor, their name was not based on the local pronunciation of "the."

Posted by Roctober Productions at 11:14 AM