Chrome “Half Machine From the Sun: The Lost Chrome Tracks From -79-’80” "Feel Like A Scientist" 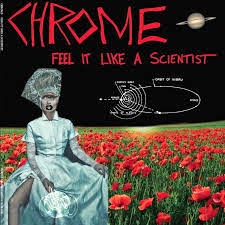 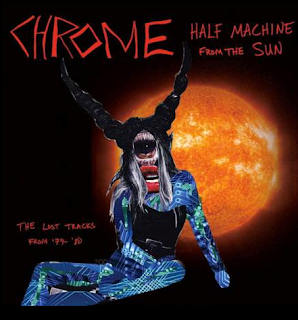 (King of Spades) The greatest argument ever for casting outer space psychedelic noisemeister Helios Creed as a madman now exists: not releasing the "Half Machine" tracks upon completion 33 years ago was fucking crazy! Creed and Damon Edge made otherworldly, urgent noise with underlying grooves and hooks that at their best were more organic, soulful, and frightening than any of the Chicago Industrial music they inspired. Their noisy weirdo rock was more jarring than all the Sonic Youth records played at the same time. This hour and a quarter of mesmerizing magic casts sonic spells that have only become more potent after festering in shadows for decades. Difficult music should not be this effortless to enjoy! So if Chrome was the future decades ago, what does that make Creed's new Chrome record (which Edge does not play on, due to his death nearly 20 years ago, though he does contribute 13 well-chosen words that serve as the sole lyrics of the brilliant anthem "Big Brats")? The crunching, crushing guitar-fueled journey through hyperspace is post-futuristic. It also manages to be savage, funny, beautiful, and wildly weird. Coupled together, these two releases contain an entire (twisted) universe of strange super-powered sounds.
Posted by Roctober Productions at 5:33 AM