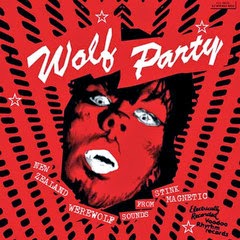 (Voodoo Rhythm) Before I describe the music, I’ll tell the backstory, but before I tell the backstory I have to describe the music a little: this genius, spooky, raw, evil trash/garage/surf/primitive/futuristic monster rock compilation is so amazing that I have a hard time believing it documents the miracle a real live unknown underground scene: if this turned out to be the handiwork of some of the great Voodoo Rhythm artists in disguise pretending to be New Zealand Maori earthquake survivor tape label discoveries that’s fine with me, so long as I get to listen to it! The backstory: Stink Magnetic for years has been releasing short run tapes, CD-Rs, singles, video tapes, etc of the wildest, weirdest secret New Zealand bands, and there are earthquakes and art galleries and a 15th anniversary involved. Now the music: Oh my god (or my Satan, if you prefer)! Bad Evil sounds like Hasil Adkins channeling Mötörhead! Mr Slackjaw’s eerie lycanthropic twang rock is chilling! Slim Chants sounds like a rockabilly band from an R-rated episode of the Flintstones! Golden Axe incredibly Devo-lutions into centuries-old New Wave! Don King makes ominous surf rock in which they murder someone in the studio each recording session for extra oomph! Full Fucking Moon murdered me! The Chandeliers are just really, really, really good at instrumental party rumble rock! And the other ten bands are just as good or better, I just would rather listen than type! Again, not sure what this musical magic is, but whatever it is, this is my favorite compilation in the last hundred years!
Posted by Roctober Productions at 6:06 AM