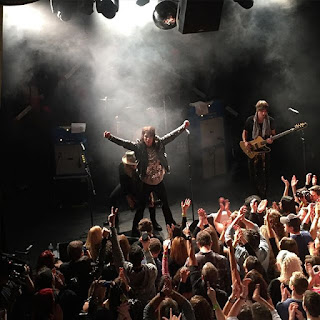 It’s only rock n’ roll – but I like it! It’s refreshing to see a young band playing like old rock sages. The Struts’ music is purely original, yet they conjure up so many great iconic musicians, songs and eras. Their live energy and visuals are beyond spectacular, and the singer has a golden voice. The Struts are for everyone!

Their mission is to bring the fun back in Rock n’ Roll. (But, in these weird times, they must start by actually bringing Rock n’ Roll back!) Although I am about present a litany of influences, the band is totally innovative. The Struts incorporate the best of Glam Rock, Hard Rock, Britpop and even Classic Rock. Dazzling singer Luke Spiller has the charisma of Elvis, the looks of Freddie Mercury, the moves of Mick Jagger, the punch of AC/DC and the glamor of Marc Bolan and T. Rex. Their music blends all of these influences into a melodic rock force field that nobody can escape.

Having members from parts of England and Wales, the band settled in Derby England. In 2010 The Struts’ momentum began with personnel changes and their first album Everybody Wants in 2014. After opening for the Rolling Stones in Paris in front of 80,000, they have been on a roll.After their Kiss This EP (2014 Virgin EMI) they have just released another, Have You Heard(Interscope).

It is exciting to catch the band on its first American tour. The Struts’ set is really powerful, because the songs are all fast paced rockers. It is like a ‘greatest hits’ show - before they even have any hits! It’s cool that they have not yet done any ballads, but I’m sure that when they record their first one, it will become a classic anthem!

Their New York city gig at Bowery Ballroom was a big party. Luke Spiller is an incredible front man. He parted the crowd in half, walked amongst us and made us participate. He had us all singing, screaming, crouching on the ground, then jumping up - completely under his command. He gives us everything that is missing in Rock n’ Roll today - complete with costume changes! The band (Adam Slack – guitar, Jed Elliott – bass, Gethin Davies – drums and Luke on vocals) play like old pros, yet they are all in their mid twenties.

Seeing The Struts at Maxwell’s (Hoboken, NJ) in September was also amazing. Maxwell’s holds about 100 people, yet the band treated the club as though it was a stadium! The room became really hot, but it was refreshing in more ways than one, to be fanned by the singer’s winged costume created by the great Zandra Rhodes (Freddie Mercury’s designer), which glimmered in iridescent blue under the lights. Luke resembles Mercury in so many ways, but he is also possessed by Jagger, Rocky Horror’s Tim Curry, Peter Murphy of Bauhaus and by something much larger than life itself. Theatrical and dramatic, always exciting!

The Struts’ tour manager introduced them onstage in NJ as the greatest band in the world! If all goes as it should, they very well might be! Everybody needs The Struts!
Posted by Roctober Productions at 12:00 AM