Sons of Hercules "A Different Kind of Ugly" 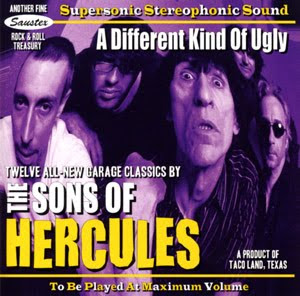 (Saustex) GUEST REVIEW BY GENTLEMAN JOHN BATTLES
Antone......The Alamo, The River Walk, Baylor U, Aquarena Springs, Pig Stands, Taco Land (R.I.P.), Riverside Mall.....Juimonos! Let's Went!!!  Hard to believe, it's been more than 15 years since I first saw Sons of Hercules. We even did a show together once. The venue provided us with a pizza...just a few months before having their kitchen shut down for the ubiquitous rat turds.
The band hasn't changed. Oh, they've shuffled the deck around a bit over the years, just enough to keep the game interesting, but the hard shell taco remains chock full of hot 'n'greasy 60s AND 70s Punk sounds. They just happen to straddle that line better than most. On "Ugly" the band comes on stronger and more hard-hitting than before. Lead singer Frank Pugliese, veteran of The Mystery Dates (whose "Easy Action" appears here.) and The Vamps (they opened for The Sex Pistols' notorious "Randy's Rodeo" gig) is just as full of bile and the rage that won't age as ever.  Guitarists Dale Hollon (the other remaining founding member) and Dave "Bone " Pederson form a double guitar attack that brings to mind Radio Birdman, while their stripped down melodicism recalls The Saints (whose "I'm Misunderstood," a staple in their set since the early 90s, appears on a S.O.H. release for the first time here). But they're not aping anyone, which could explain why they were largely ignored by the 90s Garage revival. The Sons of Hercules didn't even wait around for the 70s Punk Revival, they just went in there and DID it. And , they're still doing it.
Posted by Roctober Productions at 8:04 AM