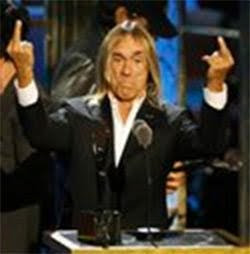 Guest Review by Madeline Bocaro
My world and the real world collided last night. I have my very own private Rock N’ Roll Hall of Fame, and the Stooges are the only band in it. Last night, the Stooges were inducted into that other Rock Hall – the one that everybody thinks is legitimate. Well, maybe now it is!
Of course, after seven nominations and rejections, they waited until guitarist Ron Asheton passed away, depriving him of the honour. But at least the Stooges have finally been recognized. Perhaps it was thanks to that debacle in 2008 – their performance of Madonna’s songs at her own induction, upon her invitation. In a way she used them, but yet again, perhaps people took notice.
Ironically, the show opened with Phish doing the ultimate prog-rock song, Genesis’ ‘Watcher of the Skies’, with its monotonous, endless keyboard intro.  Eeeek!  Poor Iggy and the guys had to be subjected to this! I could see the wheels turning their heads, thinking ‘Do we really want to be a part of THIS – the antitheses of everything the Stooges stand for?’ They cut to Iggy in the crowd wearing a suit, then to a close-up of Meryl Streep. Does this make any sense at all? Was I watching the right channel? I was squirming throughout the long-winded accolades and detailed glorification of Genesis songs in their induction. Thankfully their acceptance speech was brief. Then Phish performed another Genesis song performed. How much more of this could I take?
Thankfully, the Stooges were up next. A wonderful historic film montage of the monstrous menagerie’s assault on the music scene was shown. The kid from Green Day read a nice induction speech, with a long litany of bands the Stooges have influenced. Iggy, James and Scott each spoke, acknowledging all the dum dum boys…those no longer with us; Dave Alexander, Zeke Zettner Ron Asheton, and those who are; Billy Cheatham, Jimmy Recca, Scott Thurston, Steve Mackay and Mike Watt.
With two upheld middle fingers to the crowd, Iggy triumphantly uttered, “Roll over Woodstock. We won!” Iggy, showing everyone his note cards, proudly said, ‘We three are the surviving Stooges.” He mentioned that Ron and Dave would have gotten a big kick out of this, and that Ron was pissed off that it didn’t happen when he was alive.
Iggy continued, “So, here we are – in the belly of the beast. There’s a lot of power and money in this room. It’s a big industry. Music is life, and life is not a business.” He gave nods to the MC5, Danny Fields, and “all the poor people who actually started rock n’ roll music” deeming them all ‘cool’. “Music is a big industry. If it makes the right decisions, it will stay an industry," he warned. He thanked “all Stooge fans, who probably couldn’t afford the $1,200 dinner” at the Waldorf Astoria. Then Iggy choked up and said, “This particular group of friends has had the fortune of having a lovely second act. So thanks.”
James Williamson said, “We were beginning to think we would have to take pride in setting the record for not getting in.”
While Scott Asheton spoke of his brother Ron, “I really miss making music with him, and I probably will for the rest of my life.” Iggy, the caged animal (you can dress him up, but you can’t contain him!) disrobed on camera, taking little time to find a monkey bar to hang from. He was pumping himself up for the Stooges’ performance, itching to break free.
With their Raw Power guitarist James Williamson, original drummer Scott Asheton, Steve Mackay on sax and Mike Watt on bass, Iggy – obviously a descendant of Godzilla - stomped around in reverie, performing (from the Stooges’ third and first albums) ‘Search And Destroy’ and ‘I Wanna Be Your Dog’. In the 70s, I thought I was the only person on the planet who loved these songs. How did it come about that everyone else likes them now too? Are they just trying to be cool?
I thought my eyes were deceiving me, but it really was that little worm Paul Schaeffer inappropriately hammering away on a very loud keyboard during ‘Search And Destroy’ (how does he always get into the act?). It was so WRONG, but I refused to let him ruin this moment for me. He should be banned from anything to do with rock n’ roll, since he wrote the song “It’s Raining Men”.
Mackay cranked up his skronking sax during “I Wanna Be Your Dog’, as Iggy entered the tuxedoed audience. There was nobody recognizable up front. Bruce Springsteen was probably hiding under a table. The only famous person visible was Dr. Oz, who actually seemed quite impressed. It was disappointing, because this is my favourite situation; when Iggy is unleashed to terrorize bewildered celebrities. If only Oprah were up front so that he would have ripped her wig off! Iggy recently said, “I'm at the time of life where people sort of pick me up by the collar and exhibit me on various occasions.”
Iggy invited a stage invasion during ‘Dog’, as he usually does at live gigs (“Let’s see some rich people up here…let’s see some jewelry up here! Come on, you're not too rich to be cool!"). It was quite a poor showing - only about 10 guys (where was Meryl Streep?!) Not like the hordes who rushed the stage at Glastonbury in 2007 – a crowd so big that it created a nice subterfuge for the person who skillfully absconded with Ron Asheton’s guitar! Iggy then did his infamous chicken dance, and it was all over.
Asked backstage if he has donated any memorabilia to the institution that was honoring him, Iggy replied, "I told them where to buy all the stuff I sold for drugs in the '70s."
Posted by Roctober Productions at 10:25 AM 1 comment: 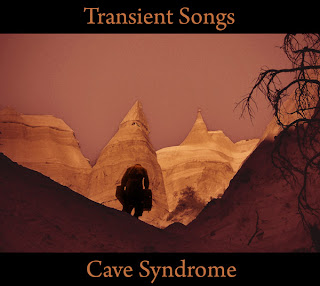 (Indian Casino Records) Vaguely psychedelic, often acoustic, and definitely pop, Transient Songs harkens back to the tuneful indie-rock of the mid-80s.  Galaxie 500 is a good reference point, for those who can remember back that far.  Atmospheric and ethereal without lapsing into pretentiousness.

Posted by Roctober Productions at 10:21 AM No comments:

(Sparlene Records) If you like the Bomp! Records sound from the mid-‘70s (stripped-down straight-ahead power-pop) then you’ll love this lo-fi treasure from 1979.  Home recorded by Mr. Grinstead himself, with most of the non-keyboard instruments played by him as well, it’s a testament to the long-lasting appeal of heartfelt songs.  The original record goes for big bucks in collector circles, but thankfully you can find the re-release at CD Baby and other fine music outlets.
Posted by Roctober Productions at 1:00 AM No comments:

(Hep Cat Records) The Gears were an L.A. punk band that formed in '78 and took on a kind of Stray Cats retro juvenile delinquent vibe, but kept one foot in L.A. punk, creating some prime pogo poundings. Their album, reissued here with a bunch of demos and singles tracks, was as solid as any record by a 2nd tier L.A. 70s punk band, and the title track coulda shoulda woulda been a hit if things had skewed right. But they didn't and the band broke up and transformed. The D.I.s (whose recordings are packaged with the Gears CD) are not to be confused with punk heroes D.I. They not only kept the psychobilly/surf/rock band vibe of the Gears, they took it further.  Singer Axxel G. Reese went completely "Happy Days" with this retro act, and made any inner turmoil between choosing between punk and 50s rock literal with the song "Mohowk vs. DA." A bunch of these tracks are expertly produced by the amazing Billy Zoom of X fame.  Others were produced as a demo for A&M Records that I assume went nowhere.  All of it makes me wonder why these guys are only known to record collectors these days.  It’s a plain shame!
Posted by Roctober Productions at 12:55 AM No comments: 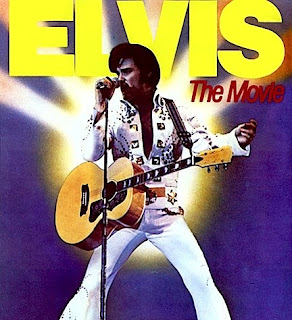 (Shout! Factory) KURT RUSSELL WAS “ELVIS”…FIRST.
GUEST REVIEW by Gary Pig Gold Nowadays, it seems anyone and everyone with easy access to velcro sideburns and a karaoke machine are busy making livings (of a sort) out of playing at Elvis Aaron Presley.
After all, Mojo Nixon was right:  Elvis Is Everywhere.
Then, of course, pull out all the old RCA and especially Sun tracks that you can, and marvel anew at the real thing as well, don’t forget.
Posted by Roctober Productions at 5:09 AM No comments: 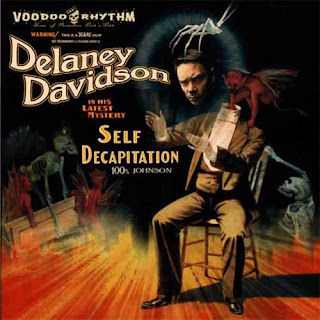 (Voodoo Rhythm Records) Though he often performs live as a “One Man Ghost Orchestra,” most of the tracks on this New Zealander’s new CD have plenty of guest musicians to liven up the sound. Often straying into cabaret territory, he’s no Tom Waits clone. Swampy, rootsy and atmospheric, the mixture of influences here leads to many pleasant surprises.
Posted by Roctober Productions at 4:53 AM No comments:

HIPBONE SLIM AND THE KNEE TREMBLERS "The Kneeanderthal Sounds Of… " 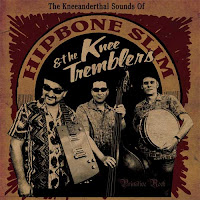 (Voodoo Rhythm Records) This CD is all over the place in terms of genres: there’s wild surf stuff, rockin’ hillbilly anthems, stripped down ‘50s rock’n’roll, and even some Mississippi blues skronk. It all has an otherworldly sound that is impossible to place in any particular time period, but it’s all done with plenty of energy and verve. Roots Rock cats will love!
Posted by Roctober Productions at 8:30 AM No comments:

DUM DUM GIRLS "I Will Be"

(Sub Pop) Finally a release on Sub Pop that doesn’t sound like warmed-over GRAM PARSONS! This is a near-perfect mix of garage-rock and girl-group sounds, brilliantly produced by BLONDIE and GO-GOs knob-twirler Richard Gottehrer. Nothing particularly new here, but it all sounds sumptuous all the same.
Posted by Roctober Productions at 8:16 AM No comments: