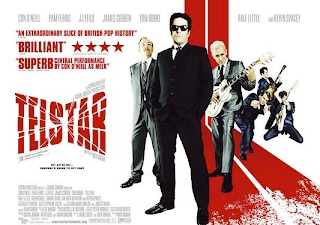 (Aspiration Films DVD) [Guest review by Gentleman John Battles]
Telstar is one of the greatest recent Rock films you could be forgiven for saying you've never heard of. It didn’t even appear to have made the Film Festival circuit in the U.S. upon it's release a few years ago.  I saw the soundtrack, once, and foolishly passed on it. Hopefully, this release will rectify the situation, as America (and all her little satellites) needs to know...The Joe Meek Story (Which should be listed, below the main title, on the DVD cover).
Meek, played brilliantly here, by Con O' Neill, took the UK pop music scene into the future, a future that would sift through his hands before his horrific, though inevitable, demise. O’neill's mad scientist conviction, with untested, ultra-low budget recording techniques, gives one a personal view of the psychodrama inside Joe Meek's head, as well as the events that would transpire in the ensuing years to follow. "Telstar," by the Tornados, the first UK single to reach # 1 in The U.S. (about a year before The Beatles pulled off the same feat), celebrated the newly launched satellite that bounced English TV broadcasts back to America (who replied, "Send some "Carry On" films!"). The song still impresses today, with the Bizarro world sound of the Clavioline, a keyboard that emitted, perhaps unintentionally, otherworldly sounds . The final sound on the record, the illusion of the satellite hitting the ocean, was created with a miked-up toilet. Don Craine, from The Downliners' Sect, once told me that, though as widely believed Meek did use his kitchen as a base of operations, he also did much of his recording "in the bog." Telstar illustrates this.
Unconventional techniques aside, Meek became one of the most powerful men in the British recording industry, producing hit records on what it cost Phil Spector to go to the deli, sans a tip. His peers, like himself, were largely middle-aged gay men (like uber-promoter Larry Parnes, and, of course, Brian Epstein, who briefly figures into the proceedings, begging Meek to sprinkle some "Faerie Dust" on an early Beatles demo, and make it a hit. The increasingly arrogant Meek drops the demo in his wastebasket). Unlike them, and others known to be gay only by industry insiders (homosexuality had yet to be legalized in Britain), Joe Meek made no effort to "tone it down". He lets a torrid affair with his protege, Tornados' bassist and newly peroxided solo star, Heinz (who did cut some good sides, under Meek's tutelage) distract him from his work. Heinz (if this really happened) appears willing to do just about anything, until he wakes up, one morning, and says, "Hey! I don't arf fancy BIRDS!" taking advantage of the new crop of eager females waiting outside his gigs and sessions. Meek has found, in Heinz, a man he couldn’t control, and rapidly begins his plunge into alcohol, pills, and mental instability.
But, Joe Meek is still on top, and the hits keep coming.  Nick Moran's outstanding direction captures the manic nature of both Meek's creative and business side. Actors representing Screaming Lord Sutch and exiled Rock and Roll god Gene Vincent come and go, all too quickly (though a hilarious pranking session between Gene, his band, and Heinz, offers some much-appreciated comic relief). Blink and you'll miss Ritchie Blackmore, then of the Meek-produced Outlaws.The second-best known Joe Meek UK and US hit, "Have I the Right", by The Honeycombs, is only represented in passing.
Meek goes from strength to strength, but something is terribly wrong.
His "Song for Buddy Holly" (recorded by Mike Berry) proves to be yet another hit, but his publicly statement, that he had predicted the date and the year of Buddy Holly's death, doesn’t help his credibility. However, he's so unphased by any implications of instability, he convinces Heinz to record the excellent Eddie Cochran tribute, "Just Like Eddie", this time, not at all convinced that his own purported psychic powers had anything to do with Cochran's death of a few years earlier. Still, the power hungry egomaniac, whose word is law, even when he's wrong, quickly descends into dementia, depression and an addiction to amphetamines. In a desperate bid to snatch victory from the jaws of defeat, Meek becomes involved in the Occult, while, all around him, music is changing drastically. Gone, or dumbed down, are the likes of early rockers Cliff Richard, Billy Fury, and Adam Faith (all represented, too briefly, by rare TV footage. Amazingly, the purely macho, and remarkably homoerotic, Vince Taylor, isn’t even mentioned). Moran's direction captures Meek in terrifying decline, just as powerfully as it did his almost fun-loving creative ascent. Joe Meek finally succumbs to his demons, in the murder/suicide shooting of his landlady, as well as himself, on the anniversary of Buddy Holly's death. A few short months later, Brian Epstein would follow, but whether or not Meek could have found his feet in the newly emerged UK Psych scene, brought on, in part, by Sgt. Pepper (creating a new hysteria for Epstein's charges that he barely lived to witness) is s another one of many "what if's" in Rock and Roll.
Posted by Roctober Productions at 10:40 AM 1 comment:

THE 16-YEAR-OLD SOUL OF BILLY PRESTON 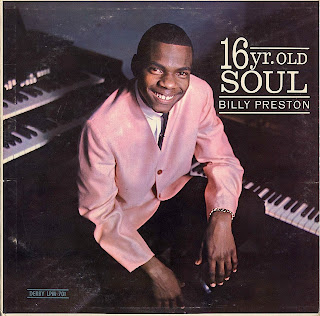 Most of us first met this latest in a long line of Fifth Beatles on or soon after April 11, 1969 with the release of a self-described little “song to roller-coast by” called “Get Back.” Never before, you see, had the Fabs shared sacred label credit with anyone other than themselves. But there it was, printed right atop that bright green revolving Granny Smith: “The Beatles… with Billy Preston.”
However, much prior to his musical roller-coasting, William Everett Preston already enjoyed a proud and prodigious career, launched from his mother’s lap where, at age three, he began playing the family piano. Soon he was performing with James Cleveland, Andraé Crouch and Mahalia Jackson, and in 1958 portrayed W.C. Handy (alongside Nat “King” Cole) in the film St. Louis Blues. Barely into his teens, Billy was on the road with Little Richard (first running into those Beatles in Hamburg) and Ray Charles when he was hired in 1963 to perform on Sam Cooke’s Night Beat. His organ work throughout those sessions – on the version of “Little Red Rooster” therein especially – lead to his immediately being signed, on the spot, to Cooke’s fledgling SAR label.
Now, it is a seldom-recalled fact (so seldom it remains unlisted even on his official website’s discography!) that the first Billy Preston album was released on SAR’s Derby Records affiliate during June of 1963. And today, for the first time in a near half century, those remarkable sessions are available again.
In a momentous year which had already witnessed the 12 Year Old Genius of Little Stevie Wonder, Billy’s 16 Year Old Soul takes a mere two minutes ten – into the opening track “Greazee,” in fact – to reveal those characteristic keyboard calisthenics the world would soon learn to love behind various Beatles, Stones, Streisand even, and so many others. In fact, these debut sessions display a mastery and, somehow, maturity on his instrument which musicians twice Billy’s age still seem incapable of summoning. The rendition of “God Bless The Child” in particular is remarkably assured for a mere sixteen-year-old, daring even to border towards the funk on certain passages (thanks in no small part to the drumming of the one and only Earl Palmer).
Similarly playful takes on mentor Sam’s “Bring It On Home To Me” as well as the Ray Charles-ified “I Can’t Stop Loving You” (speaking of Modern Sounds in Country and Western Music!) show Billy swirling atop his Hammond in ways that may be more “outasight” than “Outa-Space,” but outright miraculous nonetheless.
Eighteen months later however, Sam Cooke was gone, so was SAR Records, and with it, most tragically as well, 16 Year Old Soul.
Thankfully indeed, Billy quickly reappeared sharing keyboards with Leon Russell every week on Shindig! and in 1969 was fully signed to the Beatles’ Apple Corps where he released two equally impressive albums, That’s The Way God Planned It and Encouraging Words – recently re-issued themselves, I must point out. Plus no doubt you’ve heard Billy quite often since then, be it on his own hits or as part of, for example, Sticky Fingers, The Concert for Bangla Desh, There’s a Riot Goin’ On, “You Are So Beautiful” (which he co-wrote with BBoy Dennis Wilson, I do believe) and, well, even portraying none other than Sergeant Pepper in the 1978 Bee Gee/Frampton movie of the same defamed name.
Right up to his passing six years ago in fact, Billy remained most sought-after and active on the stage and in the studio with both old pals (Little Richard, Eric Clapton and the Stones) and new (jumping from his sickbed to record a track with the Red Hot Chili Peppers in 2005). Why, even Miles Davis deigned to tip a musical hat his way with a track on his Get Up with It album entitled, yes, “Billy Preston.” Imagine!
But for and on the record at least, this long winding story actually began back in that promise-filled June of 1963, with a most precocious soul of only sixteen applying his all to one dozen short and tart-sweet tracks of young fancy.
You really do owe it to yourself to spend the nearest half-hour with each and every one of these raw gems as soon as possible.
Posted by Roctober Productions at 10:32 AM No comments: