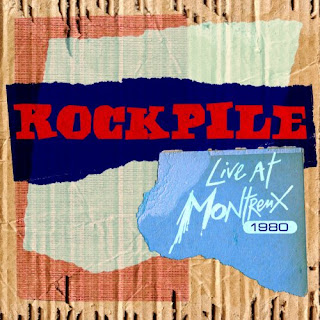 Just like most near-lifelong B’maniacs stuck in the summer of 1980, news that no less than John Lennon was about to reenter the recording studio after an unprecedented five year AWOL filled me and my ears with eager, excited anticipation. I mean, there could be no doubt the Chief Beatle would have identified with, not to mention greatly appreciated, the leather-jacketed back-to-raw-basics approach the late Seventies' p-rockers had brought to an otherwise milquetoast music scene during his hiatus. So, naturally, these new Lennon recordings would undoubtedly reflect said fire and fury, righting all that was wrong upon my AM and maybe even FM radio dial. Right?

"Imagine" then my utter disappointment when the resultant Double Fantasy – at least John's tracks – appeared coated with layer upon layer of innocuous goop that sounded far, far more Billy Joel than Joey Ramone.

I can understand, I suppose, that Lennon was being delicately eased back into the early Eighties marketplace with the least offensive, most mainstream audio sheen possible. But just a minute: This was a man who had until then never once feared to recklessly puncture the sonic envelope, public opinion not to mention the Billboard Hot 100 be damned. So why was he now making music with a buncha too-high-paid, perfectly-pitched NYC studio cats as opposed to with, duh, a real band?

Listen, forget Paul, George, and even Ringo – there already existed in 1980 a fab foursome that were more than up-to-the-task of injecting what turned out to be John's final recordings with all the fun and frantic force they so richly deserved. Why, these guys were even fellow Brits, one of whom had concocted a little retro-masterpiece called "I Hear You Knocking" which Lennon once remembered to be his favorite record of 1970!

Not only that, said combo had, on the very heels of Double Fantasy, released a galloping gem of a record called Seconds of Pleasure which could stand the vinyl test against "Power To The People" and possibly even "Please Please Me" (to say nothing of "Cleanup Time") with one '59 Telecaster fried behind its back.

Alas though, as John chose to exit his recording career via the dreaded middle of the road, Billy Bremner, Terry Williams, Dave Edmunds and Nick Lowe, dba Rockpile, were busy bashing out some of the most brilliantly base rock 'n' bop you or I have ever heard. Even today, all these decades and D-chords later, songs such as "Teacher Teacher" and "Play That Fast Thing (One More Time)," to say nothing of albums like Labour of Lust, Repeat When Necessary, and the above-mentioned Seconds, flip and flop with all the majesty of your typical vintage Elvis or even, dare I say it, (With The) Beatles number. Yes, unless someone out there can prove to me otherwise, it appears Rockpile were just about the best band at work anyway, anyhow, and anywhere as those Seventies became the, gulp, Eighties.

Proof extremely positive of this claim can now immediately be found upon Eagle Rock Entertainment's joyous Rockpile Live at Montreux 1980 CD, which in sixteen tracks and a mere, lightning 49 minutes captures the quartet at their absolute, astonishing popabilly peak.

Now remember that, due to myriad contractual (and other) snafu's at the time, Rockpile all too seldomly found themselves together on stage performing the dozens of songs they'd helped write, perform, and/or produce for slews of Mickey Jupp, Carlene Carter, Elvis Costello and of course Edmunds and Lowe records. In fact, only one Seconds of Pleasure track – the blackboard jangle classic "Teacher Teacher" – made its way onto Live at Montreux. Yet with numbers the caliber of Graham Parker's "Crawling From The Wreckage," the aforementioned Costello's "Girls Talk," and even a "Let It Rock" which, with its note-perfect "Rock Around the Clock" break, sounds so much more nutty yet nuanced than the Rolling Stones' previous reading, there's more than enough pleasures to go around and around.

For example: a thoroughly pub rock-soaked "Sweet Little Lisa," a "Queen of Hearts" precisely the way it's meant to be heard (so sorry, Ms. Newton), an undeniably adulterous "I Knew The Bride" not to mention possibly definitive versions of "So It Goes" and "Switchboard Susan." Why, even that oldie but still goodie "I Hear You Knocking" makes an appearance in typical R-pile reckless abandon. In other words, here is a band captured at its completely fully-stoked prime, ripping across their on-stage repertoire in a manner which, tempered and duly tamed, formed the basis upon which most every subsequent American "new wave" hit was built, from Greg Kihn on down to all the Tommy Tutones and Rick Springfields you'd ever care to recall.

But then, what of our heroes themselves?

Rockpile most unfortunately splintered soon after their Montreux grandstand, Dave Edmunds moving on to produce the reformed Everly Brothers, for example, and sustaining his solo career all the way through 1990's "King of Love" while his erstwhile partner Nick Lowe eased into life as the undoubtable Cary Grant of rock 'n' roll (buoyed by abundant "What's So Funny 'Bout Peace, Love and Understanding" Bodyguard royalties for starters).

Tragically, I must report no other band has appeared since to fill the smash-happy void Rockpile left in our world. But at least we finally have, with Live at Montreux, both aural evidence of what all the buzz was about and another sixteen reasons to mourn what could have only been if Billy, Terry, Dave and Nick had continued to call it rock for us all.

But! There remains plenty of Double Fantasy out-takes still begging for them to overdub upon, of course….

Posted by Roctober Productions at 7:38 AM No comments: 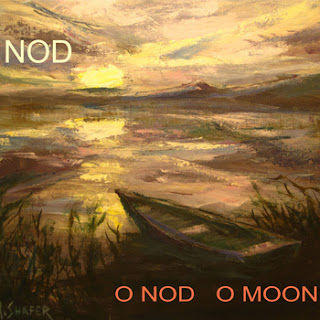 (www.nodrock.com) At their best they are like an all-Mo Tucker Velvet Underground!
Posted by Roctober Productions at 9:15 AM No comments: 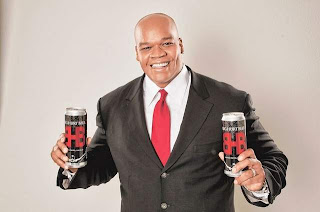 (www.bighurtbeer.com) With an entertaining but ultimately disappointing Sox season over it's time to talk about the weirdest thing this season. No, not Youkalis's batting stance, or the Sox rescheduling a Yom Kippur game to include the Jewish third baseman, but rather Frank Thomas's beer. Thomas was an unbelievably gifted player and will always be tremendously respected by the fans here, and he's done a good job on TV as an analyst, so I'm glad he's back in town. But because he was quiet, prickly, or stoic during his playing days I wouldn't say he was warmly beloved, which one would think would be the criteria for launching a restaurant, bar, or brewery in your name. But I guess I loved him enough to try it, and that's where it gets weird. First if all, I am no beer connoisseur -- if I wasn't drinking Big Hurt I'd be drinking cheap-assed Old Style, so I genuinely can't complain..I don't have the tools to do so. It tasted fine.  'Better than Bud Light' is as specific as I'll get. But DAMN! The packaging?!? First of all, the huge BHB logo, with the backwards 'b' kind of made me think of HGH, the performance enhancing drug every slugger but the naturally gigantic Thomas (and Thome, and maybe a couple others) used in the 90s. But that's a stretch. The real weirdness is the shirtless stud logo of Thomas's rippling back, shaved head, and gleaming muscles. I can't imagine what they were going for. Often the iconography of a muscular black man's back exposed vulnerably despite being broad and muscular is used to invoke the era of slavery. But forgetting that, to me the logo just seemed like it was declaring this to be gay beer. Coupled with the big muscled Frank statue unveiled this year at the ballpark that looks like it was sculpted from a Tom of Finland drawing, it seems the Big Hurt is going for a whole new audience, which might be good business, but it's a bit surprising. Despite his sexy stats Thomas never struck me as a sexy, seductive guy. But if it sells lager, more power to him!
Posted by Roctober Productions at 5:36 AM No comments: 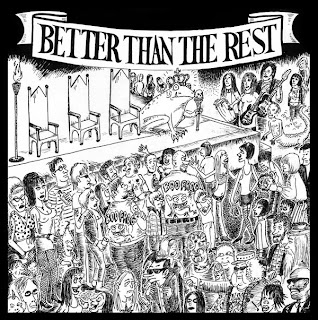 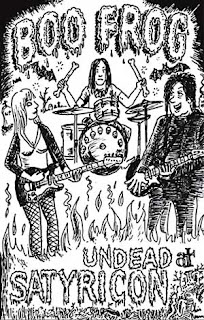 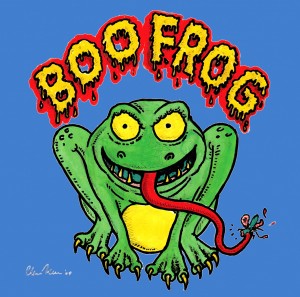 (www.boofrogrock.com) These wonderful West Coast weirdos recall the sound of the amazing first Beasts of Bourbon LP, and I know I've made that reference a lot, but it ain't cuz I'm lazy, it's because I consider that  a psychobilly landmark so special that any time I invoke it I am giving the highest praise. Track down that album if you can, or just do the next best thing and dig up the LPs, cassettes, CDs, and Soundcloud spookiness of these amazing muck makers. What I love about Boo Frog is that when the dude is on the mic the creepiness gets genuinely creepy; these 'billies can sound legitimately psycho! But when it's the lady singing there's a sprinkle of whimsy, but not that late-Cramps novelty whimsy, something more organic. That even holds for their straight up novelty song from a forthcoming album...which a tribute to our own Ratso! Yayyyy Boo!
Posted by Roctober Productions at 3:40 AM 1 comment: 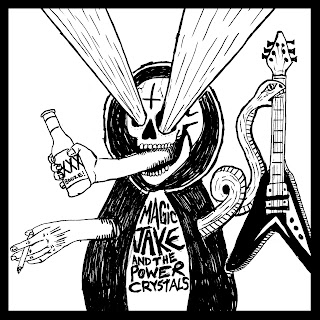 (Burger) Raw yet slick Detroit garage voodoo that sounds like the MC5 working with Don Kirschner. You know what else is raw yet slick? A greasy uncooked burger...so this is the perfect label to release these musical rock n roll salmonella germs!

Posted by Roctober Productions at 3:26 AM No comments:

Billy Doohickey "Looking for Easy Street," "Goin' Back to Town," "The Bluegrass Collection" 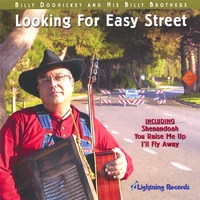 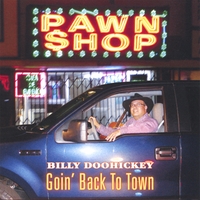 (Lightning Records) Mr. Doohickey is of interest to Roctober readers because his alter ego Arshag Chookoorian is the son of Roctober fave Guy Chookoorian, the Armenian Mickey Katz! These releases are on the label Guy started in the post-War period, and Guy even appears, singing and oud-ing it up on these releases. But Billy is his own man, or to be more accurate, Billy is Disneyland's man, as Arshag and his crack crew of bluegrass-ready rockers appear at the park as a hillbilly act entertainign the strolling crowds (and since the Country Bears got fired they are the keepers of the rural torch). And you just might see another Billy and the Hillbillies playing when they ain't there. BUT what makes these recordings so interesting is that Arshag is the least rural singer, ever! His smooth, elegant vocals as urban and urbane as could be, and his devotion to 70s AOR icons resulting in countrified versions (often not too countrified) of Doobie Brothers and Dan Fogelberg songs, and when he does Willie, Hank, and Ferlin Husky he still manages to make it more Midnight Special than Hee Haw. That Arshag ended up a themepark hillbilly is an imperfect fit, but like all Roctober family never-quit diehards, I like to see the positive side: this is a survival in the biz victory for a talented cat rather than a cruel twist of music industry fate.
Posted by Roctober Productions at 2:58 AM No comments: