George Harrison “All Things Must Pass” 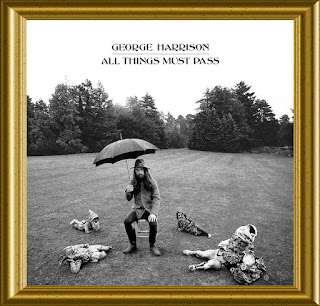 A little hysterical perspective here, if I may, as that once-Fabulous Four deign to Get Back to Disney:

November of 1970: The very first thing I can recall about All Things Must Pass was it cost me (actually, truth be told, it cost my dear grandmother) a whopping $7.99 Canadian! ...and that was still after Sam the Record Man's gigantic in-store, pre-Xmas deep deep discount. And even though Capitol/Apple's enticing shrinkwrap sticker boasted “3 LP's For The Price Of 2 Including Full Color Poster” – the “free” LP being Side 5 and 6's Apple Jam ...and no, I doubt I played it more than once either – that big 23-by-35-inch image of George stayed stuck to the inside of my bedroom door clear through the arrival of his rhythm guitarist’s Imagine album's Tittenhurst piano-white poster, causing many over thirty in my household to repeatedly exclaim “Oh my, who is that scary looking old man??”

All domestic aesthetics aside, ATMP was in fact the first Box Set to proudly become part of my collection, and each Harrisong's pretty holier-than-me lyric reprinted upon its dust sleeves point quite directly towards the similarly vinyl boxed Jesus Christ Superstar due just a little later, if I may draw such a parallel. But when all was said and sung, strictly secularly speaking this great big George box remains every bit as weighty – literally, historically and socio-musically today as it did as ‘70 became '71 ...while the man's fellow ex-Fabs were still busy crooning about getting on yer feet and entering the streets, taking a morning bath and wetting hair, and not shouting or leaping about may I remind everyone.

The deceptively Quiet Beatle did indeed have a LOT boxed up to get off his chest and onto tape after at least a half-decade of being, as he most revealingly explained to Dick Cavett at the time, “subtly sat upon” by Messrs. Lennon, McCartney and Martin. As a result the melodies were absolutely astounding, the chords beneath surprisingly serpentine, and as noted the lyrical sentiments were much more often than not perceptive, profound, and deeply penetrating to the extreme. All the better then to be sonically supported by Phil Spector's equally sweeping Wall of Sounds; wholly suitable productions which today remain even more unique and, yes, spectacular ...especially when A/B'd against those comparatively anemic mixes on the album's previously-re-issued 30th anniversary bonus material: Thank God, or Whomsoever, George resisted, as I quote his 2001 threat of, “remixing every track to liberate the songs from the big production that seemed appropriate at the time but now seems over the top.” Really, George? May I just say those gorgeous, big productions tower proudly over what could have been diluted via, for example, your pal Jeff Lynne ...perish the very thought.

Now it could be argued by some, myself included, that George never again approached the pomp or majesty of All Things Must Pass (perhaps he shouldn't have used up all his best material on his first post-Beatle release?) and along with – for entirely different rhymes and reasons of course – John Lennon's Plastic Ono Band it remains one of the special few long-players that can still stand loudly and proudly alongside... oh, say, Rubber Soul, Revolver, or even Beatles VI. Yes, it was in 1970 the sound and sentiment of a man, and musician, demonstrating among many other things just how sweet life can be by setting oneself free. And it all still sounds every single bit as lustrous and liberating – not to mention unquestionably box-worthy – all the way up here in 2021. Let it continue to roll into the night.
And, as for his old bandmates? Can we just Let It Be now …PLEASE.

Posted by Roctober Productions at 12:46 AM No comments: 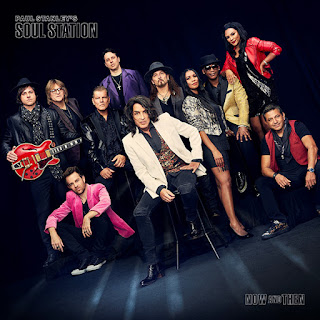 (paulstanley.com) Overall, this record is fine. I imagine that one of the bummer things about being in KISS (or in many of the heritage acts with huge catalogues of long standing fan favorites) is that you are a musician and you don't get to make records; this is Stanley's first release in almost a decade, since KISS' last album, and this is just the 4th studio album Paul has been on this Century. That said, an album of mostly covers of prominent Philly Soul and Motown classics played by a band so slick and talented that it sounds incredibly close to the original recordings, and sung in a respectful, non-outrageous, competent falsetto is kinda karaoke-ish. Stanley's voice has proven itself over the last 50 years to be very distinct and it is mainly because of imperfections. There's a kind of flatness that seems regional to Long Island, over the top rock n roll phrasing that adds superfluous syllables, and especially as he has aged, an instinct to muscle towards notes even if they aren't pretty all the way through. You don't get a much of any of that here. There is no point where this seems like bad karaoke, it's fine, but more bad might make it bettter, and a bolder or more innovative or looser approach to the instrumentation could have been cool. There are some originals here, but nothing as exciting as Stanley's best songwriting in the past, I really can't remember anything specific, and I just listened to it. But again, this is fine, if your rock n roll job does not let you make records, you get in where you fit in, so I'm happy he made this, but I wish it was a little better or way worse so I would feel compelled to listen to it again.
Posted by Roctober Productions at 6:55 AM No comments: 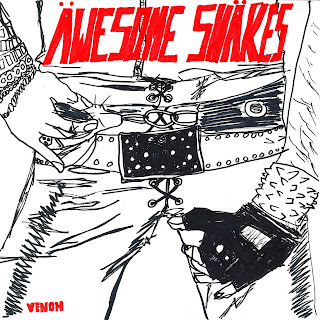 (Stand Up Records, 2021) If you didn't known this band's name you would easily be able to guess, as the majority of the songs are about things being awesome or about being snakes (which, I suppose, is awesome). This reissue of an early 2000s Midwestern ridiculous riff rock relic proves that nothing is as timeless as lo fi, stripped down, absurdist snake songs sung by a dude who sounds like Fred Schneider trying to be intimidating and a lady who sounds like she could sell an apple to Adam and/or Eve. A vinyl reissue (of what I believe was originally a cassette duplicated on someone's mom's Radio Shack Realistic© brand duo-deck stereo) is a glorious way to celebrate surviving a pandemic. The question is, can you survive a vintage snake attack?
Posted by Roctober Productions at 1:10 AM No comments:

The Creepers "A Night with..." 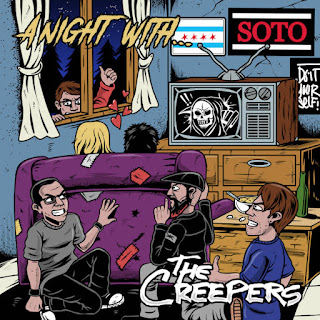 (thecreeperschicago.bandcamp.com) I am not the biggest fan of the snotty, nasal punk school of singing, except for the Zero Boys, and this dude gets really Zero-ish on the epic (3 minutes, twice as long as some of the songs on this EP) "Dead Party," so I'm giving this a snot pass. Alternately, like every sane person, I am a huge fan of guitars pummeling out 1.5 chord repetitious nasty gutter rock songs. Thus, I must conclude: Creep on Creepers!
Posted by Roctober Productions at 7:39 PM 1 comment: 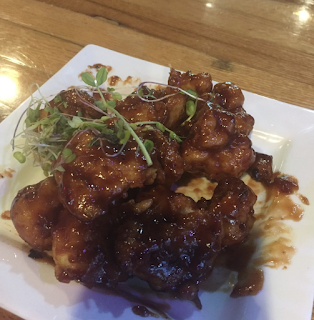 (https://www.majani.biz/) This is not some cauliflower trying to be something else situation, this is just an A-list vegetable prepared so deliciously that it amazingly emerges as truly one of the best barbecue dishes on the South Side, which is a ridiculous, but accurate, thing to say.
Posted by Roctober Productions at 7:32 PM No comments:

Wallace the Brave by Will Henry

(https://www.gocomics.com/wallace-the-brave) This might be the best contemporary comic strip going. LiO may be better at gags, and the Cathy regeneration as a single-panel artisanal hand painted COVID-themed comic is nothing to cough at, but just look at this comic! It is not only funny, but the craftsmanship and design is devastatingly great --- only the late Richard Thompson's Cul de Sac compares. I mean, look at those germ hands! That is a masterpiece panel. Then he licked them! That is a punchline!
Posted by Roctober Productions at 5:41 PM No comments: