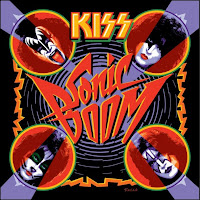 KISS hasn't released a studio album in over ten years, and hasn't recorded memorable material in almost twenty. In those decades Gene Simmons flexed his creative muscles by figuring out non-musical ways to exploit the brand, branching out into reality TV, coffeeshop, and coffins (Dimebag Darrell was reportedly buried in an official Kiss Kasket). This crass commerce risked turning one of the band's greatest assets into a dirty word. “Shameless” shouldn't mean disgracefully commercial. It should mean the ability to boldly bellow awesome lyrics like, “Danger you, danger me, danger US” without a hint of irony. On “Sonic Boom” KISS reclaims its crown of shamelessness, and subsequently deliver one of the most absurdly joyous rock records in years: a true guiltless pleasure.
KISS pledged that this CD would be a return to the sound of it's early LPs and that promise is delivered, quite literally, with some recycled instrumental and vocal phrases sure to get the tongues of KISS Army vets' wagging Pavlov-style. But more importantly, this hard rocking effort avoids the three instincts that have worked against the band's best musical interests in the past: they aren't trying to be artistic (a la '81's Lou Reed-assisted concept album “The Elder”), they're not following trends ('97's stillborn post-Grunge “Carnival of Souls”) and they aren't putting marketing over music ('98's comic book/3-D themed “Psycho Circus”).
Instead almost every song on this record is a triumphant rock anthem, with half climaxing in chants. The material sounds fun to play (KISS cover bands should be delighted), and were clearly written for the pyrotechnic-powered live arena. The lyrics are profoundly un-profound, a glorious goulash of mixed metaphors (“this is Russian Roulette...the deck is loaded”), stock rock phrases (“let your backbone slip,” “out on the street”) and the classic rock equivalents of moon/June rhymes ( “desire/fire,” “street/heat,” “knees/please”). Gene Simmons sings tune after tune about being an arrogant sexual beast, and Paul Stanley (who produced and wrote most songs) unleashes numerous bombastic hymns about living a glorious rock 'n' roll lifestyle. Most impressive is that, despite being unquestionably pandering, horny, and simplistic, this is utterly truthful. Simmons is genuinely lustful and egocentric, and when Stanley sings, “Let me hear you say 'YEAH'” he wants to you hear you say YEAH from the bottom of his hirsute heart. The Dylans and Radioheads may be more artful, but they've never been this honest.
A classy development on this record is the elevation of the new guys. Drummer Eric Singer and guitarist Tommy Thayer earned their greasepaint by filling in over the years in the studio and onstage when original members Peter Criss and Ace Frehley made themselves unavailable (Singer also served time in the 90s after Criss' original replacement, Eric Carr, died of cancer). Though both are wearing their predecessors' costumes and makeup, efforts are made to spotlight them as individuals, including having the current lineup re-record their hits for a Japanese CD (included as a bonus disc), eschewing vintage photos so that their faces appear in all publicity (including on tiny KISS M&Ms), and most significantly, giving them vocal solos. While this won't make fans forget their predecessors (especially because Singer's raspy voice recalls Criss', and Thayer's “When Lightning Strikes” mirrors Frehley's signature “Shock Me”), they turn in solid performances. Also, their instrumental contributions, crunchy solos and subdued drum fills, make the album feel both classic and undated.
If there's any nod to contemporary pop on this album it's Simmons variation on Fergie's “London Bridge”/”My Humps” practice of putting a bunch of common euphemisms together until you're not sure what the hell's going on. On “Yes I Know” the Family Jeweler croons, “Is it heads or tails tonight/You can't bring this boy to his needs/I guess I'm guilty baby, if you please/If I'm going down in flames, baby I'm going in style.” As best I can figure, he either engaged in coerced reciprocal cunnilingus, or he followed up anal with some elegant immolation. Then again, maybe Simmons pioneered this cryptic technique. KISS fans have been trying to figure out what a “Deuce” is since 1974.
Posted by Roctober Productions at 2:53 AM