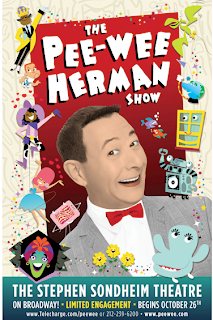 PEE WEE’S SHINY HAPPY BROADWAY PLAYHOUSE (October 27, 2010, Guest Review by Madeline Bocaro)
Surprisingly , there wasn’t a kid in the house under age 30 for this 8pm performance – the 2nd night of Pee Wee’s Broadway run. It was couples night at the Playhouse. Guys escorted their gals. Some went reluctantly and some willingly. In either case, it was infinitely more entertaining than a chick flick. And the guys finally got to witness their rival up close – their wives’ obsession – a ridiculous 6-year-old boy in a grown-up body. Gals whose guys refused to come, rang up their pals with whom they used to watch Pee Wee on TV every 1980s Saturday morning. They hadn’t been in touch for ages, but now they urgently needed a date!
The couple sitting next to me were hardcore fans, clutching Pee Wee dolls and wearing red bow ties. They uttered things like, “Pee Wee is a genius! A national treasure! He could have died since the 80s, and we’d never have gotten to see him at this epic moment in time!” When I mentioned that Pee Wee’s bicycle is now on display at the Hollywood History Museum in Los Angeles, and that it is, in fact NOT at the Alamo, they were nearly drooling! They left their 2-year-old at home. “He is Godzilla, and our home is Tokyo.” Too bad they didn’t give Pee Wee a chance to dazzle their little terror into submission!

I was solo tonight. My dear boyfriend has generously humoured me way too many times. Most recently, he was splattered with fake blood as we sat front row at the Alice Cooper concert. I gave him a break tonight, and sat blood-splattering distance from Pee Wee, alone. Close enough to see his pancake makeup and his insanely twisted facial expressions, and feel like I was actually on a real play-date at the Playhouse!
The blindingly bright, bedazzling and extremely colourful Playhouse was a wonder to behold. Everyone gasped as the curtain rose to reveal it. This was the psychedelic haven where our latent childhood fantasies were taken on an acid trip all those years ago. Under a stunning glittery blue sky, all our favourite shiny, happy characters appeared; Chairry, Clockey, Magic Screen, Conky, Pterri, the Flowers, the Fish, Randy…And there was a knock on the door every two minutes; Cowboy Curtis, Miss Yvonne, the King of Cartoons…
Paul Reubens is on some weird trip. He is really into this crazy little boy character. I think he is actually stuck in it. His mom probably said, “Paulie, if you keep making those silly faces it will stay that way forever!” If he did not have an existing mug shot, we could easily believe that his whole psyche is frozen in time. The New York show runs through January 2nd, 2011 – and will surely be extended. He’s previously performed it in Los Angeles. Reubens’ wacky juvenile alter-ego is still as sincere and genuine as ever. And he looks exactly the same after 30 years!
Most delightful was that the original Jambi the genie (John Paragon) and the real Miss Yvonne (Lynne Marie Stewart), ‘the most beautiful woman in Puppet Land’, were both in the show! Jambi was as camp as ever. His face was painted the shiniest green (eat your heart out wicked Witch of the West!) Miss Yvonne’s hair was bigger and higher than ever – and also full of glitter.
Pterry the pterodactyl was a beautiful shocking neon green whirlwind of prehistoric joy! The smiley Flowers were, vivacious and gorgeous with their googley eyes and smoochy lips. Chairry was sweet, plush and adorable. Globey resembled the original animated character with a long nose and French accent. (There was a latter Globey 2.0 on the TV show that wasn’t as freaky). I did not see the point of the annoying giant pantomime bear – who was obviously there to irritate Pee Wee as well. It only made me miss the Cowntess, Floory and Billy Baloney that much more. And they should have included the bizarre singing food items in Pee Wee’s fridge.


The dialogue was fast and funny, ridiculous and absurd. Pee Wee was in fine form, with a brilliant unflinching mastery of child-like facial expressions. Lots of nice special effects - but in moderation, maintaining a retro ambience (yes, the 80s are retro these days!) Puppet master Basil Twist - whose recent work with Joey Arias in the show Arias With a Twist was breathtaking - brought all the characters to life, but kept them surreal. Pterri flew around on very visible strings. Magic Screen spewed lots of useful information. Pee Wee sang and danced a touching duet with Chairry. Pee Wee read his pen-pal letters - steeped in the hilarious exaggerated international stereotypes of yore - as Globey pointed out each pen-pal’s locale on his head. A new ShamWow puppet was introduced, who appeared whenever Pee Wee was being ‘shammed’ - Wow! We were treated to a Penny cartoon, and a vintage Coronet instructional film on lunchroom etiquette (Don’t be a Mr. Bungle!)  Random lines from old Hollywood, and infomercials were referenced. Pee Wee had a hilarious elongated moment enjoying a noisily deflating balloon. Latin handyman Sergio wired the Playhouse for the Internet, replacing the old tin-can-on-a-string telephone. Pee Wee nearly burns down the Playhouse in his cooking segment.
Absent were the little kids whom Pee Wee used to entertain on the TV Playhouse. The addition of some kids in the cast would have made it more FUN (the magic word, by the way). Although not enough to make the show too adult-themed, there were several double-entendres. The postman tells Pee Wee that he has a ‘nice package’, and presents him with a shiny pink jeweled box.
There was lots of laughter and screaming. I wonder if kids of today, who are wrapped up in technology and have forgotten how to actually have fun - the main theme of the show - would even understand the joy of a plasticine playhouse with animatrons and puppet friends. There was an innocent time, when ‘I know you are, but what am I’ was a sufficient retort to a name-calling bully. It was really, REALLY nice to visit that wonderful time and place again for one more magical, sparkly evening.
Nice to see you again Pee Wee!
Next stop, Vegas?
Posted by Roctober Productions at 7:42 AM