When You're Strange DVD 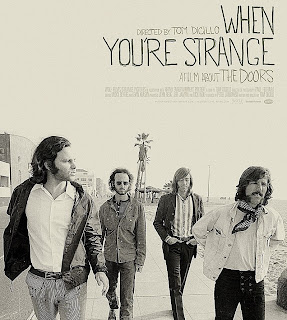 (Eagle Rock) A FILM ABOUT THE DOORS…FINALLY !! (Guest Review by Gary Pig Gold)
The summer of 1970 was certainly a strange one in, for, and around what we may now quaintly call the pop/rock scene: Paul had just left his Beatles, for starters, the Stones and Dylan were missing-without-much-action, kids were throwing various Jacksons, Osmonds, and even Bobby Sherman way up the charts whilst the older kids were pretending to get back to the garden via a newly-released big-Hollywood Woodstock movie.
Meanwhile, this particular R-tober Reviewer was busy buying up every single Creedence record he could lay his young hands on, I’ll have you all know.
Then again there was the, well, strange case of John Densmore, Robby Krieger, Ray Manzarek and Jim Morrison who, after having closed out those Sixties with a “flop” album (The Soft Parade) and even floppier run-ins with the law (their singer having gotten busted acting naughty on stage in Miami, and again on a Phoenix-bound airliner) now found themselves in 1970 under immense pressure to resurrect their career and get back to where they once belonged. As in the basics, musically speaking that is.
These various struggles, conflicts, lewd behavior indictments and then some are all fully explored – along with, thankfully, lots of great music too – in a fascinating documentary entitled When You’re Strange: A Film About The Doors, freshly available on DVD and Blu-ray from those fine folk over at Eagle Rock Entertainment.
Now, unlike the band’s own series of understandably self-serving concert films over the years or, on entirely the other hand, Oliver Stone’s utterly cataclysmic 1991 biopic The Doors, Tom DiCillo’s When You’re Strange perhaps comes closest to finally presenting, as no less an authority as Ray Manzarek has long promised, “the true story of The Doors.” It does so by wisely keeping 21st Century interference to a bare minimum, concentrating instead on a wealth of live and studio footage from throughout the band’s surprisingly brief career intriguingly intercut with – and this is the film’s real coup to my eyes – never before seen segments from Jim Morrison’s barely-released 1969 short subject HWY: An American Pastoral.
Without ever getting overtly ham-fisted a la the above-mentioned Mr. Stone, DiCillo (along with Johnny Depp’s narration) weaves the HWY footage of Morrison speeding across the California desert to actually drive When You’re Strange forward, onward and upward from the band’s infant gigs on L.A.’s Sunset Strip through the recording of their landmark debut album in 1966 and subsequent stardom. It’s interesting, not to mention important to realize and understand just how big a pop star Jim was at this time: He may have been playing it so cool by singing the dreaded “higher” word when The Doors performed “Light My Fire” on Ed Sullivision, but at the same time this was a man only too happy to appear bare-chested and love-bead-adorned alongside Davy Jones and Mark Lindsay across the pages of 16 Magazine.
When You’re Strange similarly pulls few punches in charting the band’s just-as-speedy fall from those poppiest of heights, mainly but not fully on account of Jimbo’s descent into the depths of alcoholic fear and self-loathing. It was indeed, and still remains, quite disheartening to watch The Doors’ slinky frontman decline from the leather-clad Lizard King of every bad girl’s Summer of Love dreams to the bearded, bloated ragamuffin who hauled sheep on stage in 1969, only to then berate his audience with cries of “You love it, don’t ya? Maybe you love gettin’ your face stuck in the shit. You’re all a bunch of fuckin’ idiots!” Oh, Morrison…
Such performance Art with a capital “F” notwithstanding, footage from the band’s 1968 European tour, and then a remarkable sequence from the “Wild Child” recording session itself, show The Doors were without a single doubt a four-piece band, oh so much greater than the sum of its equal parts, with each man contributing his own special brilliance to the creation. There wasn’t ever a single weak musical link to this band, its writing, arranging, and (usually) its performing skills, and When You’re Strange never once lets the viewer get distracted from this critically important fact …despite the carnival atmosphere which never seemed to cease swirling around the entire proceedings.
Finally, we also see how, following that tricky Summer of 1970, the band fully rebounded with its final two albums, Morrison Hotel and L.A. Woman (again, When You’re Strange presents fabulous footage from the latter’s recording sessions …apparently, the last existing footage of the band as a whole).
But then, most inconveniently, Jim moved to Paris and rumor has it actually died there very early on the morning of July 3, 1971.
Now he may indeed remain “hot, sexy, and dead” as Rolling Stone declared a decade later, kicking off the Doors Resurrection each surviving band member continues to propagate most efficiently to this day. Yet Tom DiCillo has bravely succeeded, where few have ever even attempted to before, in stripping away the excess, puncturing the mythology, and – What a concept! – letting The Doors’ MUSIC do the talking.
Strange indeed.
Posted by Roctober Productions at 4:40 AM