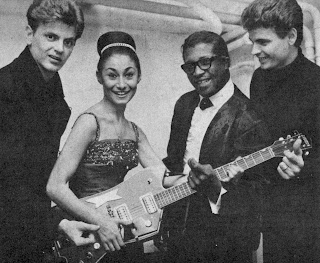 (Eagle Rock) Guest Review by Gary Pig Gold
Not even the most peripheral Roctoberan should need any explanation whatsoever at this point regarding how two young Kentucky-bred brothers placed a stamp upon the Sounds of the Sixties equaled only by Buddy and his Crickets:  One listen to nearly every Lennon / McCartney vocal duet from “Love Me Do” onwards – not to mention those most blatant protégés by the name of Simon and Garfunkel – more than prove that particular sonic point.
Then there are albums such as Songs Our Daddy Taught Us (1959) and the ever-amazing Roots (from ’68) which created the undeniable, if criminally under-acknowledged template for the Folk- and/or Country-rock of any Dylan, Byrds, or even Rank and File track you’d care to name-check. “We owe those guys everything,” the man I still prefer to call Bob is on record as admitting. “They started it all.”
Plus need I even mention a staggering string of globe and genre-spanning hit records which continue to reverberate within the DNA of popular music creators and listeners to this very day?
Absolutely not. But what I feel I do need to state here and now, however, is the incredibly long-awaited DVD release via Eagle Rock Entertainment of The Everly Brothers Reunion Concert: Live At The Royal Albert Hall, now here for all to watch, weep, and learn from.
Ending their first run beneath the spotlight with a literally explosive on-stage break-up in 1973 – culminating with Big Don’s caustic statement “The Everly Brothers died ten years ago” – the pair saw and spoke with one another only once (at their father’s funeral) during the ensuing downcast decade. Not surprisingly though, I suspect, as one can imagine little constructive musical place for the duo throughout an era book-ended by “Bad, Bad Leroy Brown” and “Billie Jean.”
But in finally burying various personal and musical hatchets (“We settled it in a family kind of way,” Baby Boy Phil told the Associated Press. “A big hug did it. I guess fate just turned”), the brothers returned to the country which always seemed to not only love, but understand them most with a 1983 performance in London. There, somehow, it took only twenty-five songs in less than an hour and a half to forever erase the years of bickering, brawling, bitterness and deeply-seeded sibling rivalry.
The Everly Brothers Reunion Concert presents it all. Every roll of the toms, every country-baked Tele-lick (courtesy of the stupendous Albert Lee), every thrash of Don’s signature acoustic and, of course, every note-and-inflection-perfect vocal duet still dripping pathos one bar, then grating passion the next. As only these two Everlys honestly ever could.
Rounding out this superb package is the (unfortunately truncated, however) 1984 documentary Rock ‘n’ Roll Odyssey, which chronicles not only the songs and successes, but strains and struggles behind this most often completely misrepresented act. And it is most apt, perhaps, that nearly every frame of contemporary footage shot for this film finds Don and Phil being chased with persistent rainfall, be they driving through their childhood hills of bluegrass or arriving in England to sound-check, face the press, and reconnect with their most ever-loyal fan base. “If I wait for cloudy skies, you won't know the rain from the tears in my eyes” after all, as their own song still goes.
Of course the Everlys followed their Royal Albert triumph with one P. McCartney-penned hit (the soaring “On The Wings Of A Nightingale”) and landmark album (1986’s Born Yesterday) which returned the duo to a much-deserved critical, if sorrowfully not commercial level unsurpassed since their late Fifties/early Sixties achievements. In fact an older, wiser, and most definitely still vital Don and Phil continue to harmonize on stage to this very day, though all attempts to get the brothers recording again (save for a lone track climaxing their 4-CD 1994 career retrospective Heartaches & Harmonies plus a song from Andrew Lloyd Webber’s Whistle Down The Wind four years later) have failed. But then, as no less an authority on the subject as Don Everly himself stated in his own inimitable manner, “I don’t know whether there’s a place for us. Country music’s turned into a kind of a video soap opera – a contest of cute butts and pretty faces.
“I was raised in front of a microphone, and on the other side of the microphone was an audience. So it got instilled in me from the beginning:  You go out there and do your best, and if they appreciate it, that’s the reward.”
Your reward? Reveling anew in Don and Phil’s Reunion Concert, and with it the fantastic flood of heartaches and harmonies those Everlys forever bring your way.
Posted by Roctober Productions at 8:13 AM