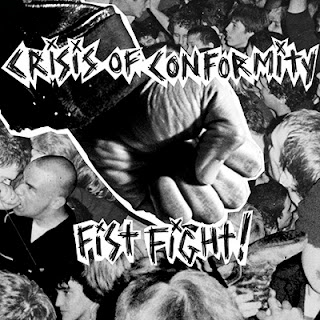 (Drag City) So the question isn't whether the 7" of former Trenchmouther Fred Armisen's fake 80s hardcore band Crisis of Conformity's (the songs were originally performed as a skit on Saturday Night Live) is funny or authentic sounding. The question is is the 7" of former Trenchmouther Fred Armisen's fake 80s hardcore band Crisis of Conformity's funnier or more authentic sounding than the 7" of former Trenchmouther Damon Locks' 1995 fake 80s hardcore band Countdown to Chaos. While both sort of miss some 80s h/c alchemy (better executed on NOFX's 1996 fake 80s h/c 7" "Fuck the Kids" or Regress' 1997 fake 80s h/c 7" "Price of Power"),  since CTC (and NOFX and Regress) was less then a decade removed from the 80s I guess they should lose some points, because it was easier to remember how to do it back then. And while it's not ha ha funny for COC to call out Ed Meese, it's theoretically funny, and anyone riffing on Suicidal Tendencies "All I wanted was a fucking Pepsi" rap gets comedy points, so COC is technically funnier than CTC. As far as authenticity, Locks' visual sense did not allow him to have a shitty xerox collage cover for his own band (though he did help COC with their shitty xerox collage, go figure?), plus his lead track is Cramps-y not h/c (though side 2's "Punky See Punky Do" makes up for it), so COC also beats CTC on that count. Still it's hard to brand anything as an authentic 80s hardcore 7" when there's only two songs!  But this is all moot, because ultimately, my all time fave fake 80s h/c act will always be Fear, because they were fake 80s hardcore during the 80s, and the kids couldn't figure out the joke! 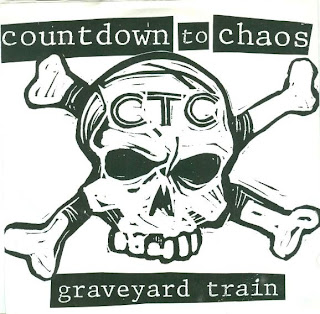 Posted by Roctober Productions at 7:26 AM