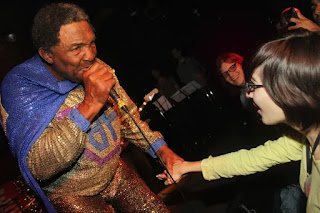 Guest Review by Steve "Pudgy"DeRose (Note: This is a "lost" review from 2014 that we are publishing for the first time. Blowfly passed away is 2016. Steve's Twitter account, however, survives, if you can handle soccer fanaticism and Japanese panty pictures)

There may have only been fifty-five patrons in attendance, but I'm sure they had a rollickin' good time at Blowfly's first performance in Chicago since September 2012. Had Blowfly changed that much since being profiled in Roctober #30 [2002]? Maybe, maybe not?

What was definitely changed was the venue for the concert; which also had the Untold Dirty, and Baby Brotha on the bill. It was the Red Line Tap [formally Roy's] at 7006 N. Glenwood on Chicago's far north side. the Red Line Tap is associated with the Heartland Cafe around its corner. Previously a show like this might have wound up at the Empty Bottle, or the Double Door.

The crux of Blowfly's act is that he's going to sing all the dirty and nasty lyrics to tunes you assign to other musical acts. Bawdy lyrics go back at least a millennium, so this can't be considered new. The comparison to make is with "Weird Al" Yankovic. "Weird Al"'s novelties are strictly "PG." Blowfly's versions are rated 'X'" (although I have never encountered a movie rated "X" for language - "rated 'R'" probably wouldn't sell as many tickets).

Blowfly begins the show wearing a hockey mask. The mask only lasts the first three songs or so. I did not recognize a lot of the songs he was parodying (and he didn't do "I Want To Be Fellated", which is what I was hoping to hear), so they must have been relatively recent. His backing band is a three-piece; the standard guitar, bass, and drums. He involves the audience in most of the numbers, going as far as bringing a female up to the stand to specifically impart the message he is intoning. Heh heh heh heh.

The most entertaining part of the concert was when he told the story about being on Dick Clark's American Bandstand when early rapper Kurtis Blow was also booked. This leads, as you may anticipate, into an extended rap playing on Kurtis' last naem. it was hilarious.

He also does at least one straight song associated with Clarence Reid (from the 1970s).

His set began 40 minutes late, but the opening acts were equally at fault. The show is just about 60 minute. 'Curfew' at the Red Line is 1:00am. Singing ended at 12:50am, and the next thirty minutes or so were taken up by commiserating with patrons, selling merchandise, and posing for photographs.

I have a Twitter account (@pudgem29) which delves into topics some people can't handle. But @officialBlowfly is one of two high-profile accounts who actually follow we (@BeauDure, a soccer writer, is the other). For that he certainly deserves something. He got as Japanese adult video from me. I've heard some scuttlebutt that Blowfly is being exploited and/or manipulated by the other guys in his act. But what ultimately matters is the quality of the performance. This was a solid hour of off-beat entertainment. If you can tolerate "blue" humor (& you should), you ought to buy a ticket to when this tour comes near you. Particularly if the venue being booked is as intimate as the Red Line Tap. Who else does this? Is there anybody new who is attempting an act like this? How much longer can he continue to do it?

Posted by Roctober Productions at 8:54 PM