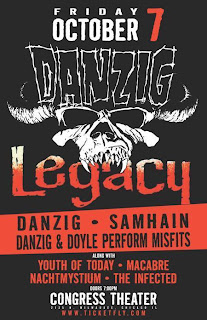 (Guest Review by Jake Austen) When I left Yom Kippur services Friday night and headed out to see Danzig perform, the surprising number of empty seats in the synagogue made me wonder how attendance would be at the Congress Theater. On Glenn Danzig’s last visit, the crowd was sparse, causing the moody crooner to respond with an average performance. Seeing lines snaking down Milwaukee Avenue (perhaps that’s where the would-be worshippers went) put my fears to rest. Of course, this Riot Fest show was no regular Danzig concert, it was the kick off of the four city “Legacy” tour, the High Holy Days of horror rock! After years of denying or dabbling in his back catalogue, the Jersey devil was finally devoting a tour to the material he recorded not only with the band Danzig but also with Samhain and his revered hardcore unit the Misfits, a band whose music he all but rejected after bassist Jerry Only legally wrangled the name away and revived a version the band in the 90s.
The show opened with a 40-minute set of Danzig songs, only dabbling in his excellent recent Death Red Sabaoth album. The sound at the Congress was predictably muddy, and with the pummeling metal riffs and Glenn’s imperfect voice (it loosened up into an impressive wail as the night proceeded) this was not a musically magnificent night. But Danzig himself, drawing from the adoring mass of fans, was an impressive rock soldier, enthusiastically going to stage war. He punched the air, threw up two-fisted devil horns, and anointed the crowd with half-empty water bottles fresh off his unholy lips as he ominously patrolled and controlled the stage.
When the band exited the stage the massive Danzig logo backdrop hit the floor and like a pirate ship’s ominous Jolly Roger flag, a new canvas arose bearing Satanic flames declaring the start of a 25-minute Samhain set. Taking the stage bare-chested in a leather bondage mask with chrome devil horns, Danzig enthusiastically attacked his old material. And though he seemed particularly irritable (the vocal monitor, inefficient roadies, the lack of air conditioning, and difficult-to-sing old songs all earned onstage gripes), Danzing deftly transformed negative energy into rock fuel. The peak of his ire occurred after he sang the Misfits-turned Samhain-classic “Horror Biz." He followed the lyric “I’ll stick a knife right in you,” with demands that someone hand him a real knife ("I need a knife, something you stab somebody with. Anybody got a knife?"), and after a reluctant roadie was promised that Danzig would not stab him, the blade was handed over, then utilized for some Teamster-esque stage maintenance.
When the Samhain banner was supplanted by the Misfits’ Crimson Ghost image the cheers were thunderous and the spontaneous pit that exploded was the biggest one I’ve ever seen. The Misfits’ 1980s (and Glenn-free 1990s revival) guitarist Doyle took the stage, and while I will never complain about a giant with corpse paint, a devil lock, and gay porn muscles playing buzzsaw punk rock guitar, the fact that Doyle played in addition to the Danzig guitarist rather than instead of him meant the sound was muddier instead of sparer and punkier. Couple that with Glenn’s voice not having the timbre of his younger days, and the songs really didn’t sound much like the Misfits. Which didn’t matter at all! The mass of Misfits-tattooed humanity was almost orgasmic hearing Glenn present these sacred songs. He did not have to coax the crowd to chant every “whoa whoa” and sing every lyric; he couldn’t have stopped them. The tremendous energy in the room made it clear that the power of the Misfits transcended any sonic realities. The 22-minute set (which is actually quite a few 90-second songs) featured such classics as “Vampira,” “I Turned Into A Martian,” and the Kennedy-assassination ode “Bullet” (preceded by Glenn’s anecdote about being banned from Texas for composing the tune). As the band closed with “Last Caress” Glenn found his inner –werewolf, and successfully howled the lyrics in his trademark croon. When the Misfits banner descended some members of the crowd actually booed, before going into a chant of “138! 138! 138!” That he had skipped the anthem “We Are 138,” and the even more anthemic “Where Eagles Dare,” gave hope that perhaps a lengthy Misfits-tune encore was pending, but alas, a fifteen minute Danzig set, culminating in a powerfully-sung “Mother,” followed by a lone Misfits tune ("Skulls") ended the night.
As a  satisfied, exhausted crowd hit the streets, each was handed a sad flyer for the “official” Misfits band’s next area show, an all-day affair in Joliet at some place called Mojoe’s, with a dozen obscure bands opening, including Stop Drop Rewind, Whiskey Business, and Bitchfit.
Glenn wins.
Hand him a knife.
Posted by Roctober Productions at 7:18 AM