Cougars and Snappers and Loons (Oh My!) A Midwest League Field Guide by Dave Hoekstra 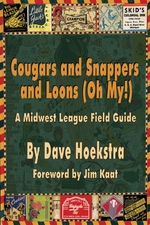 (Can’t Miss Press) Hoekstra, one of the last newspaper writers standing in Chicago, has delivered a thoroughly minor league book! And by that I don’t mean that his writing his bush league by any stretch, but rather that this isn’t another overly self-important dire tome about the World Serious or George Will’s poetic fields of symbolic green or fathers playing catch with sons or world shattering moneyball or AMERICA AMERICA AMERICA! This is a book that is as casual, pleasant, and completely mellow as watching a AA team whose players you don’t know and whose place in the standings is irrelevant and whose mascots and vendors are as much a part of the team as the third baseman. Collecting his columns about the Midwest League from the Kane County Cougars programs and reflecting on his loves of history, baseball, and spending lazy evenings at ballparks, Hoekstra makes it seem like everything is right in the game and the region. He lucked out in that the Midwest league is full of decades of weird records, characters and nuttiness, and especially that he hooked up with a team that made the Midwest seem really Midwestern by having a program where players, many from foreign countries, would live with local host families, making the players important parts of the town’s community and cultural fabric. This also made the players look back on their seasons on the Cougars with special fondness, as evidenced by Hoekstra’s locker room conversation with Dontrelle Willis, whose career was in a horrible downspin in 2008 when Hoekstra approached him. Asked to discuss anything else he would have clammed up, but recalling his warm memories of his host family, minor league coaches, and good times, he had plenty to say, with a smile on his face. In these pages the way we meet a lady umpire, a minor league ballpark obsessive who’s been to 162 parks, Derrek Lee’s Japanophile father, a baseball-themed microbrewer, a Dayton Dragon gospel drummer, lots of players, lots of old folks, lots of townies, and a 97 year old historian who explains about how the 1909 Hannibal Cannibals got their name. If you pay $80 for a Yankees ticket and there’s Jumbotrons blaring you can forget about ignoring the game and noise and reading this book. But next Summer you just might want to bring it along to  a game in Beloit, or Rockford, or Appleton.
Posted by Roctober Productions at 4:09 AM