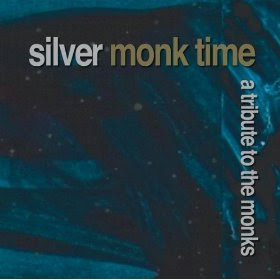 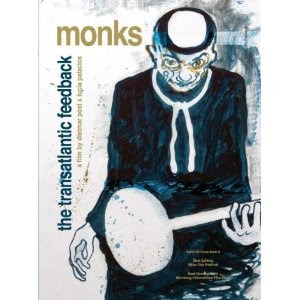 (Play Loud!) Despite a British Beatles boost, garage rock is thoroughly American…in fact garages themselves are pretty damn American; politicians don’t promise chickens in every pot and cars in every driveway, because they knew Americans wanted to have to move their automobile so their teenage sons can practice “Louie Louie.”  Thus it’s no surprise that when Americans heard the mind-blowing proto-punk music made by the mid-60s, German-based American ex-soldiers the monks it immediately registered on this side of the sea as some of the greatest garage rock ever recorded. Sure there was a tinge of contrarian, nihilist avant-garde in their unprecedented instrumentation (buzzsaw electric banjo, thundering all-floor tom tribal drumming), dark lyrics about hate and war causalties, and strange black outfits that mirrored actual monks, right down to the shaved tonsure haircuts. But us Yanks figured Count V wore capes, The Phantom wore a mask, when he howled “Love Me,” and the monks shaved circles in their heads – it’s a great gimmick, not art! I’m giving all this background to explain the sometimes cold, sometimes harsh reaction this remarkable film has received from factions of the American garage rock community. Post and Palacios, who caught monks fever decades ago in Germany, began working on this documentary at the best time; in the years after bassist Eddie Shaw’s book had finally provided background on the mysterious band, and in the years surrounding the act’s one full reunion. Considering the subsequent deaths of two of the five monks, and the re-submersion into shadows of formally lost monk, Larry, this is pretty much the only monks documentary that can ever be made. And thus, the fact that the filmmakers see the band as more of a brilliant art project than a garage rock phenomenon rubs some folks the wrong way. Also, the fact that the filmmakers attribute a lot of the brilliance of the project to the band’s svengali managers who had a lot of the weird ideas is reasonable but frustrating in a few ways. The most obvious frustration is that while all the monks are ready and willing to talk, the management isn’t interested in being on camera and revisiting what they must consider a short-lived failure. But worse is that despite the guidance the monks received unquestionably making something genuinely unique out of a regular beat club band (albeit one with more diverse talent than their peers, considering the way the group’s membership represent not only the breadth of America’s wide geography, but also its musical breadth, as jazz, rockabilly, R&B, and C&W were in the backgrounds of the unlikely quintet), the filmmakers may be giving to much credit to their management. Much emphasis is put on a manifesto the group committed to, but part of that manifesto was to never smile on stage, and footage of Gary Burger on German TV shows that although the group embraced much Teutonic tutelage, they were American pickers and grinners all the way, and what made each monk special was the way they were not sheep-like, but thoroughly individual.  But I don’t begrudge the German filmmakers in any way for giving a German perspective on this band, and the incredible research, intelligent interviews, and excellent editing make this a must see. Sure, one could argue that a tangent into the work of a German director who was scheduled to work with the monks but never got to bring his vision to fruition may be indulgent…but shit, if you found sexed-up ancient footage of a nubile, pre-disco Donna Summer in an avant-garde TV commercial you would leave it on the cutting room floor? I can see why some garage intelligentsia (and to  a lesser degree, a monk or two) have had some objections to this, but they are misguided. Monks-philes need to embrace this last look at the full band. Similarly, one can see how garage purists would be aghast at the double CD compilation "silver monk time," a tribute CD to the five American G.I.s gone monk-y. But here they are completely off base. This CD includes futuristic artists like Alec Empire and Psychic TV, German art rockers like Faust and Fehlfarben, and big names that don't necessarily register as big amongst connoisseurs of "Dirty Water," like the Fall, Mouse on Mars and Barbara Manning. But none of them are desecrating the monks' music. What is most amazing about this is how clearly the monks music, without much alteration, can seem like punk to punks, psyche to psyche-heads, avant-garde to avant-gardeists, novelty music to humorists...their sound is so unique that no one is wrong. This is one of the best tribute albums I have ever hard, in no small part because the artists have such  a connection to, and respect for, the music that they leave the best elements intact. But also each artist hears the music so differently that the tweaks really alter and elevate the songs...no karaoke here! The involvement of Gary Burger (who updates his vocals for the current wars with Empire and also teams with Faust) and the late Dave Day not only give this a stamp of approval, but also may force some haters to have to buy it. Highlights include Silver Apples and Alan Vega taking “black monk time" to space, "The Raincoats finding the sweetness and beauty in "Monk Chant," and (the garage rock approved) 5-6-7-8-s going absolutely "Cuckoo."
Posted by Roctober Productions at 8:42 AM