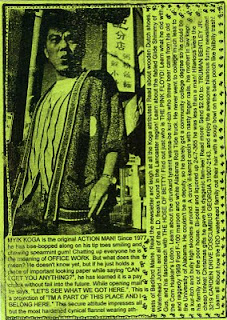 (3219 Carden Dr. Columbus GA 31907-2143) Not sure what Bentley, Jr. wants to officially call this thing (at one point he toys with the name “Zero Human Population Newsletter”), and not sure if he’s still doing it, as the constant flow of thick envelopes I received for a year has slowed down (I last got one mid-summer). And more importantly, I don’t know what the heck this is! Like all great “kook”-style manifesto/diatribe/handouts this densely-packed single sheet Xerox is single spaced, cut-n-paste graphic aided, and has hints of paranoia, megalomania, xenophobia, and other words ending with vowels. Yet Bentley also seems to be a very smart dude who is perhaps parodying these tropes. His humor is always evident, and when he gets all power mad he uses hyperbole and absurdity, declaring things like, “TRUMAN is GOD,” The NEWSLETTER is a HOLY CULT,”  “Love is only for TRUMAN. He is the KING, THE PRINCE, GOD-FUHRER MAGI of all life.” He also seems to be far from an outsider, having enough knowledge of fluxus and dada to dismiss the movements. And for a serious cult leader he makes lotsa nutty pop culture references to things like the Three Stooges, The Avengers TV show, Spongebob, and Mayberry RFD. And his biography is so murky he almost seems fictional. Does he work at a Florida restaurant called Snacky’s Shack? Does he make a cable access show? Does his daughter go to a posh elite religious school? Was he the best worker at a pizza place in college? Is he a car expert, helping promote car shows or races? Is he KING? But saying all that, if it turned out he isn’t “real,” and this is some kind of hipster joke I would be shocked, because Truman Bentley, Jr. works so hard and is so dedicated that this is a true work of art, passion, drive, and some kind of genius. s he created a film?Whatever this thing is I will always respect it, and encourage folks to send a couple bucks his way for a sample, if only for one densely packed page commencing with one of my fave opening passages ever: “CONTINUED FROM ANOTHER NEWSLETTER:------CAT FOOD. The main SPACE ALIENS have heads that are CATS”
Posted by Roctober Productions at 4:00 AM