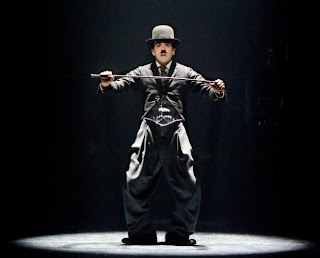 Charlie Chaplin, the comic icon who deeply touched our hearts is always remembered with a smile. His silence was truly golden - words could not express the depth of pain in the little lost soul whom he portrayed effortlessly in his films - because he was playing himself. This man was so much more than a flickering monochrome image of a funny, charming poor little tramp. Chaplin was staging his own reality. His comedy was based on tragedy, and his artistry is timeless.

The rags-to-riches life of Chaplin seems too sad to be made into a Broadway musical. Abandoned by his alcoholic dad, a mother whom he loved dearly gone insane, three gold-digging wives and ruination of his career by a gossip columnist overwhelmed Chaplin’s incredible life. His on-screen alter-ego, the Little Tramp evolved into a Pierrot figure, reflecting his own feelings of dejection.

Under stark white lighting, spectacular Art Deco period props and costumes in black and white, glittering silver and gray took us back in time to the glamorous Hollywood world of the early 1900s - the birth of ‘flicker films’ before sound and color. Use of floor-to-ceiling vintage film clips and Chaplinesque movies as scenery evoked the era quite well.  But it was Rob McClure’s superb acrobatics, a fine salute to Chaplin’s own natural bumbling ballet, which propelled the entire production. Tightrope walking, juggling his hat and cane, tap dancing on roller skates and clumsy slapstick antics drive the story and bring to life the brilliant yet self-effacing Chaplin in his mismatched too big / too small clothing.

Amidst whirlwinds of dance by the entire troupe, the performance slows down and echoes back several times to the small boy, Charlie calling for his mother as she is being taken away to an asylum - the crux of Chaplin’s lifelong pain. His supportive brother/manager is his only ally, sharing in the agony of their mother’s illness. Success comes fast, wives come and go, and the horrible Hedda Hopper - the best singer in the cast - is relentless in bringing him down. After Chaplin makes The Great Dictator film mocking Hitler and begins to speak out for humanity, Hopper has him branded as a Communist. Despite the British born Chaplin’s fondness for America, he remains in exile in Switzerland with the love of his life, Oona O’Neill.

At the dawn of talking pictures, Chaplin fears that he will be lost in time. In the final scene, he receives an honorary Oscar in 1972. (The standing ovation he received was the longest in history.) The red carpet of the awards ceremony is the first burst of color we see all evening. Although surprised at his notoriety after so many years, the aged Chaplin’s brief return to Hollywood was bittersweet.

As Rob McClure waddled off stage for the last time in Chaplin’s oversized shoes, (he actually walked into the movie screen and morphed into his own film animation!) it felt like we had a true glimpse into the heart of this humble, passionate icon who will never be forgotten.   (page 1 of 2)

I wonder why the classic Chaplin-penned song ‘Smile’ was not used in the performance, as it sums up his philosophy so beautifully.

If you smile through your pain and sorrow
Smile and maybe tomorrow
You'll see the sun come shining through
For you.

Light up your face with gladness,
Hide every trace of sadness
Although a tear may be ever so near

That's the time you must keep on trying
Smile, what's the use of crying
You'll find that life is still worthwhile
If you just smile

Chaplin Trivia:
I once stood in Chaplin’s footsteps in the cement at the doorway of his Tudor style Hollywood studio built in 1917, once surrounded by orange groves. Most of his films were made here. Many pop records were recorded there when it became A&M studios. The expansive Jim Henson building (since bought by Disney) still has a statue of Kermit dressed as Charlie on its roof. In 1969, it was designated as a Los Angeles Historic-Cultural Monument.

Stan Laurel (of Laurel & Hardy) sometimes acted as Chaplin’s understudy at the British Music Hall. Chaplin and Stan Laurel arrived in America on the same boat from England.
Posted by Roctober Productions at 6:08 AM