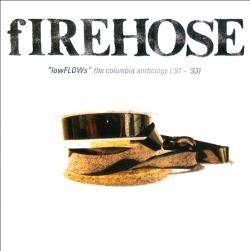 (Sony Legacy) [GUEST REVIEW BY CHRIS BUTLER] This has been a really difficult review to write because, like most of humanity, I love the Minutemen. I loved them the instant I heard the song  "Search" on the Rodney On The ROQ Vol. 2 compilation. I loved them when I got to see them. I was bummed when I heard that D. Boon had died. Anyway, when I heard that Mike Watt and George Hurley had started a new trio with Ed Crawford, I was curious and mildly psyched to hear it. I remember thinking that 'Brave Captain' from the first fIREHOSE record sounded like Argent, for some reason. There was clearly a movement towards more mainstream/classic rock as well as a joining in spirit with a lot of the indie/college radio/120 Minutes type bands around at the time. So, by the time they rolled around to doing the 2 "major label" records compiled here, it seems to me that the Minutemen's anti-establishment-ism had mostly been subsumed by a big label contractual album fulfillment attitude. You know, a couple of good ideas per album with a lot of filler. "Hey guys, how are we going to fill up this record?" " I don't know, a calypso number?" And furthermore, there are the bonus and live cuts on here that I'm afraid point to some slackening of passion, you might say. 'Slack Motherfucker' for instance. I always considered it a sort of indie novelty song, and even Superchunk quickly grew tired of playing it. And it just seems to me that when fIREHOSE did it, it was like "Hey, this is what the kids are into these days," or something. Then they brought back "The Red And The Black," a B.O.C. cover which the Minutemen had done (pretty righteously, I thought) and I can imagine Watt and Hurley at practice saying to Ed, "Well, we already know it, you should figure out the guitar parts." OK, that's not fair, of course, but it's what I was thinking when I was listening to this reissue. And I know there are tons of fIREHOSE fans out there who will take issue with me. Like my brother who saw the James Worthy Tour in '87 and wore the hell out of the tour shirt and always dug fIREHOSE. And they had Slovenly with them on that tour, so you've gotta give them credit for that. And you've also gotta give them credit for reforming fIREHOSE earlier this year instead of going on tour with a Tupac-style hologram of D. Boon. That would have been a really bad idea.

Posted by Roctober Productions at 4:20 PM