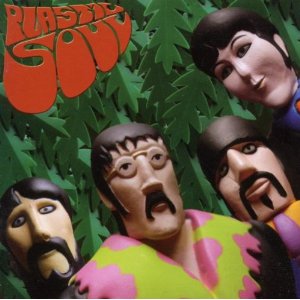 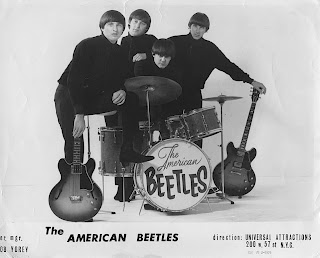 (Exotica Records) Guest review by Gary Pig Gold
While the very concept of the “Tribute” album has over the years become quite a scary one, the Beatle Tribute can strike downright terror into the hearts of any who still value their sensibilities, let alone that hitherto-durable 214-song catalog. Yes, as far back as Bill Shatner's 1968 stab at "Lucy In The Sky," John, Paul, George and even Ringo have had their melodic legacies sliced, diced, half-baked, botched and certainly butchered by those both well-meaning and, well, just plain mean. Truth to tell, these days I find it increasingly hard to sit through that Bee Gee/Frampton Sgt. Pepper movie even with tongue deep in-cheek.

But then, there is London's own Jim Phelan who, far from fearing Captain Kirk's "Lucy" upon first encountering her, took matters firmly into his own brave hands by launching not only an actual record label (Exotica), but an entire series of Fab compilations under the regal Exotic Beatles banner. Its nineteen-year (so far) mission? To, yes, boldly go where no audio Tribute of any sort has dared before. As in Maurice Chevalier, Mae West, Professor Stanley Unwin and Evening Standard art critic Brian Sewell casting their Mersey-coated throats alongside those of various hillbilly squirrels, metropolitan police choirs, Balsara's Singing Sitars and even Shang Shang Typhoon with their utterly Spector-silencing "Let It Be."

"The sound of the world going mad!" cried Record Collector Magazine, while no less a moppin' top authority than the Daily Mail On Sunday hailed Exotic Beatles 3 as, and I quote, "more exciting than the Beatles Anthology" (a sentiment which, by the way, I totally agree with).

It is, I most humbly proclaim, the greatest Beatle (-related) album since Something New and possibly even All You Need Is Cash.

After being introduced in their very own words, from their very own mouths, by none other than Tony Randall, Ed Sullivan, and the Japanese Beatles themselves, we're immediately sent "Back In The USSR" via one Irishman, one Hungarian, and one exquisite collection of Russian throat singers, all together now as Baba Yaga with an a cappella blend perfectly suiting this number through its B.Wilsonesque splendor. Why, I shall never hear the first two-minutes-forty-three of that White Album in exactly the same way again. And, hopefully, neither shall you.

Follow that with over an hour of additional Northern Songs out of Siberia (Bugotak's coldly Kraftwerkian "Kon Togethy"), Singapore (a 1964 "Can't Buy Me Love" from folk star Shan Kuan Liu Yun) (who obviously plugged in a year before Dylan ever unpacked his Strat at Newport), Germany (candlemaker Klaus Beyer, who could certainly teach Giles Martin a thing or three about Beatle mash-ups!) and a whole invasion of further tracks from Russia (special note given to the bands 7B and Boney Nem, who treat "And I Love Her" to both techno and death-thrash makeovers which would cause at least one half of the Lennon/McCartney songwriting team to cackle in solidarity).

Garnish with a speed metal "Eleanor Rigby," a Dixieland "Here, There and Everywhere," "Day Tripper" as interpreted by barking dogs from New Zealand, and then a sub-waltz "Yellow Submarine" which flawlessly incorporates snatches of the Blue Danube, tie together with intricately inserted spoken-link segues courtesy of not only J,P,G & R but even B. Dylan (reciting "Hello Goodbye"!) and Michael Mills (the Minister of Youth and Evangelism at the Family Alter – or is it Family Altered? – Chapel in Battle Creek, Michigan, warning us of the evils of Beatle backwards masking) and we have an album of wild, wicked wonder which so easily deserves a place right there between Magical Mystery Tour and Meet the Beatles.

Needless to say then, Jim Phelan is much, much more than just another B-maniac with a great big pile of CD's strewn across the living room floor. This is obviously a man who not only collects the records, but absconds with, absorbs, then totally abstracts and recasts them in ways that make every ear within shot simply boggle. And this being written here and now by a man who has yet to outgrow his Dance and Sing Mother Goose with a Beatle Beat LP, I'll have you all know!

Hear for yourselves immediately then, not only on Plastic Soul, but each of its three excellent companion volumes as well.

Or, to put it even more exotically, "The Beatles Are Dead! Long Live the Exotic Beatles!"
Posted by Roctober Productions at 4:03 PM