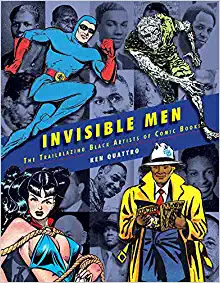 (Yoe books, 2020) Quattro is doing God's work with this book, exhaustively researching the lives of mostly very obscure artists from the golden age of comics, an era in a field where there was little respect or documentation for even the bigger artists, and these ain't the bigger artists. Telling the tales of the Black men (dudes only this go 'round) who toiled at the bottom of the ladder of an industry where the ladder only went up the 2nd rung is fascinating, and the elbow grease to find out anything about these cats (even that they existed) is impressive. The exception to the obscurity is Matt Baker, who while the general readership did not know his race, was a successful artist due to the amazing sexiness of his Phantom Lady, which was as close to onlyfans as youngsters got those days. Also relatively well known is the team behind 1947's short-lived All Negro Comics, which might have lasted longer than the few seconds if it did not face the sadly inevitable discrimination (they could not get paper to print issue two). Invisible Men features the stories of figures whose comics careers could have been lost to history, like Alvin Carl Hollingsworth who did a few great horror comics in the early 50s before becoming a magnificent illustrator in the late 50s through the 70s. Calvin Massey also had a revered art career, but only after having toiled in the pages of 4th rate horror  comics in the 1950s.  Alfonso Greene, who went to school with Alex Toth and did some nice work before getting arrested in an armed gang kidnapping something or another, would likely be lost if not for this fine tome. The best part of the book is that full stories are reprinted by each artist, and while few actually feature Black characters (there is a Lena Horne biographical comic, and Baker's Voodah was a brown skinned Tarzan for a little while, til they started coloring him lighter) all feature spectacular Black talent.
Posted by Roctober Productions at 4:59 AM