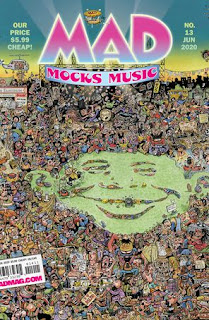 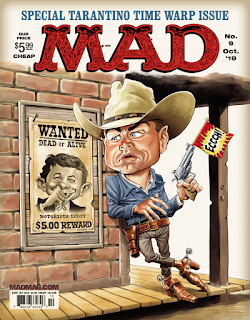 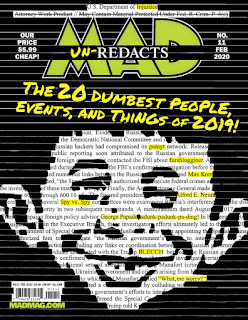 (2019, 2020, Madmag.com) When the Internet began reporting the death of MAD last year I was a bit perturbed, but hopeful, as they committed to publishing on a regular schedule with a mix of reprint and new material. Because Sergio Aragones and Al Jaffee are still alive, and because some of that oft-reprinted material is worthy oft-reprints I held out judgement. And judgment is ...mixed! The first issue was their now annual 20 Dumbest People, Events, and Things entry, which hinted at a great strategy, as they included a lot of old material that complimented the new material because they had vintage stuff about Trump and the environment and politicians and celebrities and corporations that completely, and very specifically, mirrored the subjects' contemporary shenanigans. Mr. Jaffee was not active (give a near 100 year old a break every now and then) but Sergio was as robust as ever., and the contemporary Gang of Idiots did pretty good in their now-limited capacity. Issue 12 was even better. Excited that QT included a Tom Richmond drawn Mort Drucker homage imaginary 1960s-era MAD cover in Once Upon A Time In Hollywood, they used that cover as the cover, then had a killer section of new material by contemporary artists designed to look like it was in a 60s issue of MAD, including a piece by Chicago's own Johnny Sampson doing a Fold In (and I cannot recommend his zine about his relationship with MAD Fold-Ins highly enough: http://www.johnnysampson.com/shop/tru-ly-mad-ly ). So VERY promising so far. But the latest issue, with a music festival theme, is more disappointing than the fact it came out in advance of a music festival-free Summer. Some of the new material is OK, but some is weirdly topical in a non-hip MAD Kids way, though there are a few great ones (I believe Sergio's long overdue A Mad Look at Port-a-Potties was new). But the reprints were curated inanely. Some were decent but one was a Steve Allen sheet music parody from the 1950s that eleven people would have found funny in the I Like Era era and zero people would like today. And that was not the only sheet music entry. Honestly, because Trump is unparody-able I felt MAD was just about the only outlet that was doing a pretty good job these last few years, as he is a worthy target of smartly juvenile humor., so I felt they were on a roll. The hybrid reprint issues originally only lost a little momentum. But this new issue does not bode well. That said, batting .667 is pretty good, and considering the clunkers in Dick DeBartolo's movie parodies the last half Century, disappointment is no stranger to MAD readers. But I will only give them another 68 years to straighten up, then I am out!
Posted by Roctober Productions at 3:02 PM