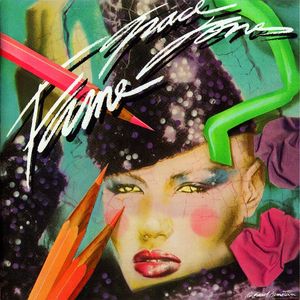 (Island, 1978) The contemporary take that 70s anti-Disco sentiment was all homophobic and racist carries some weight, in that many 70s anti-Disco people were racist homophobes, but that doesn't mean the reason they hated disco was because of their sicknesses. When club dance music got commodified and mainstreamed there were really low-quality things that happened. The flood of soulless, overly orchestrated, cookie cutter records that came out literally pushed other records out of stores. That the Stones, KISS, and other rock stars did disco-influenced tracks to cash in on a trend (or in the case of the Bee Gees, embraced new production techniques and styles as an extension of the craftsmanship) certainly irked a lot of rock fans. But f-word, some of the records were bad! And the fact that Grace Jones' early disco records are so bland and boring and lifeless feels seems racist and homophobic! How could anyone working this amazing artist not recognize how special she is and how important it is to make music that addresses and breaks accepted views of race and sexuality. Thank Grace Jones that this glitch in the matrix was fixed soon after and she began making the best records ever. But  it is hard to hear why she is special on this placid platter.
Posted by Roctober Productions at 7:23 AM