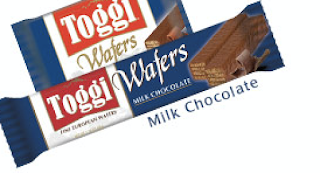 (www.toggiwafers.com) Obviously the very odd, heroic woman working (often seemingly by herself) the 3AM Walgreens shift is not someone whose tastemaking I should allow to blindly re-make mine. When there are co-workers around I have heard her say some crazy, crazy-assed shit. Plus, that shift, where 71-84% of customers seem to be losing one or more fights to some form of addiction, including a few mentally ill stragglers who basically move in for the night on occasion, is enough to push anyone to the brink of not knowing ass from elbow. But she was enthusing so hard on this candy bar, and despite the fact that is is so big and was so cheap and was parked in the reject lane bordering the queue where they try to get stupid people to impulse buy alcohol wipes with pictures of emojis printed on them and chargers for iphone 3s, I felt, essentially, I owed this essential worker at least enough to commit to trying the candy she loved. Granted, her analysis was not sublime ("I think it's the wafers that are good, but you know, it's chocolate!") but a 99 cent candy as big as a TV remote is worth a try. Well, it was not terrible, but it definitely tastes off. Not like it was turning bad, or like Europeans have different palettes, but like someone in the wafer factory was bad at math and they just made this wrong. But not so wrong as to be inedible. But not right. However, if they make this hero happy, god bless Toggi!
Posted by Roctober Productions at 7:06 AM