The Masqueraders "Everybody Wanna Live On" 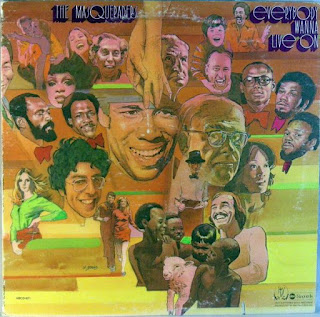 (Hot Buttered Soul, 1975) I love the Masqueraders because I met them busking in Memphis, had them on Chic-A-Go-Go, arranged for the Dept. of Cultural Affairs to bring them to Chicago for an amazing concert, and because they actually wore masks for a while! But I knew their following two LPs and their 60s singles, and somehow overlooked this gem. Despite settling in Memphis, and being the only group other than Ike I have ever seen on Isaac Hayes' label, they were not a gritty, funky, Southern soul group, they were a sweet harmony soul act, with an amazing lead vocalist (Lee Hatim) and a more Philly sound than you would expect from a Hayes-produced record. This is a warm, comforting hug of an LP. "Traveling Man" is so good, and the title track is a grand, great theatrical statement. This album may be the most buttery of any on Hot Buttered Soul!
Posted by Roctober Productions at 10:27 PM