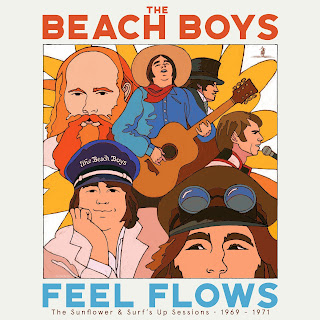 Yes indeed, it goes without saying that B. Wilson and his familial band full of brothers, cousins and friends have enjoyed a career quite unlike any other across the cuckoo annals of show business.

Scoring a local hit in 1961 straight off the mark with their very first little indie single, then soon after placing a sophomore release into no less than the hallowed Billboard Hot 100 – and all at a time when the majority of the guys still had to be home in time to attend class the next morning – The Beach Boys, it could be argued, really started their marathon run at the very tip-top, suicidally crash-dove towards oblivion a few short years later, and only then slowly but surely began their struggle back up the ladder of ever-lasting fame, fortune and, ultimately, all-American star-spangled glory.

Which just all goes to show, I suppose, that blood surely runs thicker than any critic’s ink, what gets around (from town to town) comes around and that, most obviously, Brian Wilson near single-in-handedly created a body of work which can surely withstand the most brutal scourges of both time and fashion.

That’s why it’s sometimes hard to fathom today that there was indeed a hole, roughly between 1966 and 1974, down which The Beach Boys truly hit rock ‘n’ roll bottom and were forced to really, really hustle their sunkist butts to keep everyone’s musical and financial heads above water. Bleak, sorrowful years when this once Beatle-caliber combo were reduced to hauling their act out on the road and into midwestern VFW halls alongside that Maharishi Mahesh Yogi. A pitiful period when their latest brave creations were routinely being scorned in favor of those from The Archies and even Grand Funk Railroad.

This was, in fact, a most harrowing era when, as no less a numbers man as Bruce Johnston Himself continues to recall, America’s Band could scarcely draw two hundred paying patrons to a series of gala performances within the very heart of New York City.

In a word then? Yikes!

Of course any other band with half its wits intact would’ve called it quits right about then – or at least ditched the “Surfin’ Safari” stagewear for starters. But the Beach Boys were more than just another pop group, weren’t they? They were FAMILY, first and foremost. And rather than remain one-upped by their musical neighbors so to speak, this musical household doggedly set about getting their affairs back in order, persisting along this rugged path for year after endless year …even when all around seemed hapless, hopeless, and far, far from harmonious. On any level.

Actually finding themselves without a homeland recording contract at the dawn of the Seventies, and with their guiding musical light apparently more interested in laying (low) than writing, arranging, singing and/or producing, Carl and Dennis Wilson, Al Jardine, Mike Love Not War and even that Bruce guy had no logical choice but to settle down to some good old-fashioned, decorum-be-damned hard hard work.

So first of all, every Boy still woke and mobile began by bringing the audio mountain to Mohammed, constructing a working studio directly beneath Brian’s Bel Air bedroom (not that that helped motivate their big brother much in the long run; nice try, though). Then they boldly formed their own record company and, crazier still, set about writing and recording a wave of albums which form not only the mythical, mystical candy core of the Beach Boys’ vast sea of tunes, but in retrospect actually hold much more than their own against such bally-hoo’d, Nixon-vintage contemporaries as the Eagles, Doobies, and even that Buckingham/Nicks-model Big Mac.

Yes, these hallowed yet too-often ignored releases from the Beach Boys’ “lost years” on their very own Brother Records imprint are literally jelly-packed with dozens upon dozens of gems you probably haven’t been able to hear enough of in years. For example, the once mega-maligned So Tough album from ’72 now sounds like no less than Carl and his Passions tackling Big Pink by way of Paul Buckmaster! And then there’s 1977’s The Beach Boys Love You, which dared to croon about roller skating, shampoo, and our favorite solar system smack dab in the middle of that Pistol ‘n’ Ramone-fuelled Summer of Hate.

Chronologically speaking then, the initial Brother albums Sunflower and Surf’s Up remain among the most universally cherished records on the planet, and both contain their fair share of Brian Wilson treasures for the ages – “This Whole World” and “Til I Die” most particularly – which rank easily amongst the very best Our Hero has yet to offer us all. Meaning: they’re some of the greatest musical works ever created by man or beast.

The two junior Wilsons blossom forth on these albums as well (“Long Promised Road” and the new box’s namesake “Feel Flows” prove Carl learned his lessons well whilst attending all those Pet Sounds and SMiLE sessions; Dennis, conversely – as always – forged his own musical identity within Sunflower somewhere between the rock-cockin’ “Got To Know The Woman” and the sweetly rhapsodic “Forever,” John Stamos be forever damned). Meanwhile, that then-new 16-track technology the Boys toiled upon under Brian’s bed(room) allowed the band to layer on those heavenly, heavenly harmonies as never before. Or, in truth, since. “Cool, Cool Water,” to mention just one, contains chorale cascades which will continue to astound the ear today, a half-century, and countless attempts at recreation since they were first meticulously piled onto tape.

Suffice to say, the music The Beach Boys made in the very early Seventies remains amongst their very, very best. No listener out there, discriminating or otherwise, should let these sounds slip on through unheard a single minute longer.

Posted by Roctober Productions at 7:22 AM