Those Shaggs “Philosophy Of The World” 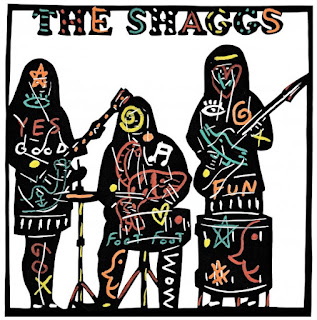 On the driz-laden afternoon of March 9, 1969, three guitar-and-drum beating sisters from tiny Fremont, NH entered an even tinier recording studio and emerged, just a few hours later, with a dozen original rock ‘n’ roll songs on some quarter-inch tape. These twelve songs were then pressed onto one thousand long-playing records, nine hundred of which immediately vanished forever off the face of the Earth. Within a year however, no less an authority than Frank Zappa declared this album, prophetically entitled Philosophy Of The World, to be “better than the Beatles,” and a decade after that the similarly inclined visionaries in NRBQ re-pressed Philosophy briefly on their very own Red Rooster label.

Now then, if you’ve already grabbed either of these scarcer-than-rare items, then you’re undoubtedly already a complete convert …or at least a collector with mighty deep connections and/or pockets. But for those thousands upon untold thousands of unfortunates out there who have not yet come face-to-foot with The Shaggs, why, Now’s Your Chance! For Philosophy Of The World, with all of its original 1969 mix, sequence and even cover art lovingly intact, has been made available once again courtesy of the fine folk over at Light In The Attic.

It is, believe you me, the greatest album you may never have heard.

From its opening title track (so lyrically brilliant that there’s a knee-deep moral lesson packed into each and every stanza!) through its garage-brand benediction (“We Have A Savior”) thirty-one ear-boggling minutes later, Philosophy is absolutely brimming with the sort of decorum-be-dumped bash ‘n’ popping that such supposed heirs-to-the-genre as Half Japanese and even them Replacements couldn’t ever come within a million notes of emulating. And how could they …or anyone else for that matter? For The Shaggs, as their daddy-slash-producer-slash-drill sergeant Austin Wiggin, Jr. wrote at the time, “are real, pure, and unaffected by outside influences. Their music is  different; it is theirs alone.” Indeed.

Sure, a cursory half-listen suggests only a trio of inept-at-best gals trying to differentiate their fingers from their toes, musically speaking that is. Yet a closer examination reveals some fiercely detailed and all-the-way-downright ingenious compositional skills beneath all of the Neanderthal strum und drumming (for example, one should hear how flawlessly Dorothy Wiggin’s lead guitar ghosts her melody lines during most every song, in true Muddy-Waters-by-way-of-Peter-Tork fashion). Dorothy’s lyrics too run raging gamuts between nervous nursery rhyming (“My Pal Foot Foot”) on the one hand hand, to blazing teen-fiery pontificating on the other (“Who Are Parents” makes J. Lennon’s post-primal Plastic Ono natterings appear pretty darn Romper Room by comparison, while “Things I Wonder” and “Why Do I Feel?” actually reel towards near B. Wilson realms of agoraphobic self-analysis). And “Sweet Thing,” with its more than touching timelessness vis-a-vis that ol’ love-gone-wrong thang, makes one wonder if the Wiggin sisters didn’t have a battered copy of Another Side Of Bob Dylan hidden under their bedroom dresser all along.

But this / that being the Swinging Sixties – and The Shaggs playing House Band at the prestigious Fremont Town Hall for roughly the entire Nixon Presidency – there’s lotsa slap-happy, good olden rock ‘n’ roll littering Philosophy Of The World as well:  “That Little Sports Car” (the only Shaggsong, by the way, to feature the mysterious fourth Shagg, Rachel, on bass) is wholly, happily, ham-fistedly frug-worthy …despite drummist Helen Wiggin’s never-less-than Beefheartian way with a tempo lurch. Plus “What Should I Do?” would not sound one bar out of place upon your favorite Lesley Gore or even, dare I say it, Shangri-La’s platter (dig Dorothy’s put-down of some Fremont stud-about-town: “He’s a two-face, he’s a disgrace, he never wins a race” …yeah, you go grrl!).

So, while it may be all too easy to file this album alongside your Wild Man Fischer or even Smoking Catapillar rekkids (personally, I place The Shaggs somewhere between Sun Ra and Dino, Desi & Billy), it simply cannot be denied that Philosophy Of The World is one of the greatest musical, uh, curiosities to ever be created by man or even beast. And I for one am glad that this true, off-blue cultural treasure is FINALLY getting the chance it’s so long deserved to make a lasting and loving imprint upon what remains of our socio-musical consciousness.

So God Bless those Wiggins then, and Please grab at least two copies of their album immediately, won’t you?

Posted by Roctober Productions at 10:00 PM