Man...or ASTRO-man? "Your Weight on the Moon" 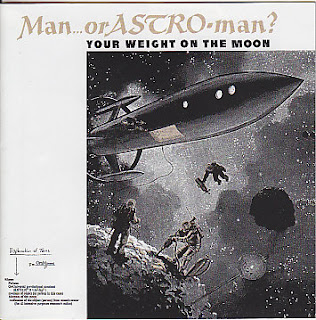 (www.overgroundrecords.co.uk)Man or Astroman?, the extraterrestrial 90s instrumental band that hailed from either Alabama or Venus, ain’t no joke. Some might say the band crested above its 90s surf colleagues because of novelty, but it’s hard to pin that particular “N” word on an act that took goofy themes so seriously. Answering only to their bizarre pseodonyms, incorporating oodles of sci fi movie samples, and performing on stages overrun by walls of monitors, working Tesla coils, and more tubes and cables than a Radio Shack dumpster, MOAM proved to be one of the most powerful live acts in their heyday. But a more potent argument against dismissing Man or Astroman as a joke band was their magnificent music. At its best instrumental surf rock splits the difference between the 1960s’ most evocative film soundtracks and its most damaging teenage guitar freakouts. And though there were challenged during the 90s surf revival (by acts like the spellbinding Shadowy Men on a Shadowy Planet and genuine novelty act the Phantom Surfers), no band in the genre left a more impressive body of recorded work. They brought traditional surf to the stratosphere and toyed with 80s electronic experimentation on scores of LPs, EPs, and singles, including classics like 1995’s Project Infinity and 1994’s Your Weight on the Moon, just reissued in England, where the band was apparently huge…the booklet features glowing reviews from Melody Maker, NME and, believe it or not, Metal Hammer). In addition to the great press clippings in the thick booklet, this CD throws a couple of awesome 7" singles into the space capsule.
Posted by Roctober Productions at 9:24 AM