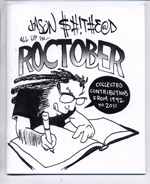 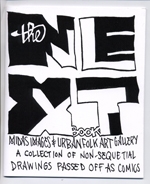 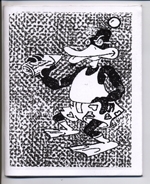 (www.midasimages.net) Roctober #50 marks the official launch of our 20th anniversary celebration, which hopefully will include a festival, another book, an LP, and more. The release of the Roctober book Flying Saucers Rock n Roll in early Fall marked the semi-official launch of the anniversary. But the official unofficial launch of the anniversary was a few months earlier when Jason Mitchell/Midas/Shithead/$#!t#e@d/whatevayawannacalhim had his retrospective art show in New York which featured the launch of three amazing limited edition books of his archival comix. Next featured stream of consciousness, semi-druggy/psychedelic sketchbook comix that were pretty impressive, the collection of comix featuring his drunk duck Dudley was awesome, but best of all was a hefty book reprinting all the comix, illustrations, concepts, weirdness, and brilliance he's done in Roctober over the decades. 45 pieces from over 30 issues demonstrate his ridiculously one-of-a-kind style that combines hip hop graffitti linework, 60s underground comix vibeology, paying-attention-in-art-school technical skills, deceptively astute writing ability, and omnivorous pop culture consumption that poops out perfection. This is one of the best Roctobers we never published!
Posted by Roctober Productions at 5:51 AM