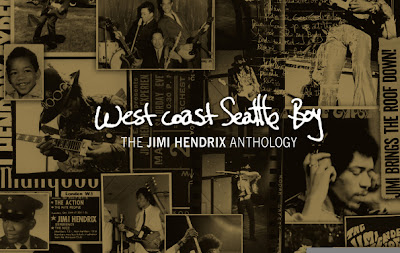 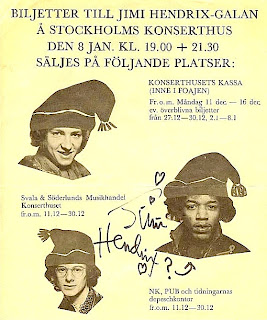 (Experience Hendrix / Sony Legacy) [Guest review by Gary Pig Gold] Last I checked over at All Music Dot Com, there were 591 titles listed within the Jimi Hendrix discography – all but nineteen of which representing items released after the man’s most untimely death on September 18, 1970. Let’s see:  with 572 albums / singles / EPs / 8-tracks / cassettes / picture discs / video tapes / laser discs / compact discs / Mini-discs / DATs / DVDs / Blu-rays / whatevers posthumously issued so far, someone out there is certainly making many, many dollars re-issuing, re-packaging, re-mixing, re-mastering and re-processing in general the (re-) recorded legacy of perhaps the greatest electric guitarist who ever died. Most unfortunately however, the vast majority of this sonic slicing and dicing is redundant at best; ridiculous and utterly reprehensible more often than not. Why, even Elvis Presley’s last two-hundred-or-so albums have been afforded at least a certain amount of historical accuracy and aesthetic concern.  Which makes me all the happier to report West Coast Seattle Boy: The Jimi Hendrix Anthology is that most rare exception to the grave-raping rule. Four CD’s and one DVD most pleasingly packaged alongside a 60-page colorful booklet within a nice mini-Neil Young Archives box, featuring a full forty-five previously unheard and unreleased Hendrix recordings which by and large actually do add something worthwhile to that already humongous discography. Interestingly, the material which right off the bat most pricked my Jimi-jaded ears were Disc One’s fifteen tracks of pre-Experience material, wherein our hero can “only” be heard blazing away behind such chitlin’ cult figures as Ray Sharpe and Frank Howard and the Commanders. In fact, the very first words we hear as West Coast Seattle Boy kicks off is Ron Isley shouting “I’m a freak for music!” as a fresh-from-Nashville Jimi, well, proceeds to freak things up as one of the mighty I.B. Specials on the Isleys' 1964 single, “Testify.”  Next, the hotshot young Hendrix surfaces on none other than Don Covay’s “Mercy, Mercy,” casually tossing off licks even Keith Richards would struggle a year later to ape when Out Of Our Heads was launched atop this very same song. But it is not until Rosa Lee Brooks’ little heard “Utee” – Revis Records # 1013-B, for those keeping score – do we unmistakably hear traces of Jimi’s own landmark style to come …two full years before the world at large did. Despite the crackerbox production techniques and equipment most likely to match, the man is nevertheless doing things with (and to) his guitar that must have seemed downright out-of-this-world on an otherwise nondescript L.A. rhythm 'n' garage session in 1965.  Similarly, whether it be showing off a brand new fuzz box on the above-mentioned Frank Howard’s “I’m So Glad,” pouring red-hot sauce all over Jimmy Norman’s “That Little Old Groove Maker,” or totally funking up Billy Lamont and his “Sweet Thang” – Stevie Ray Vaughan, for one, must have gone to school on this 1966 rarity – here was one character that was destined not to remain in the anonymous background for very much longer at all. Why these historic tracks have never all been collected together in such an official way until now is a mystery to me. Soon enough, thanks to the prescience (not to mention open door and phone book) of Animals bassist Chas Chandler, Jimi settled half a world away in totally swinging London, playing the mere accompanist to no-one no longer. Accordingly, the remainder of West Coast Seattle Boy tells the story we all know, but keenly using different takes – and in some cases different tracks – altogether. For example, here’s a six-minute (!) pre-vocal version of “Are You Experienced,” a recently unearthed, unedited “New Rising Sun” on which Jimi also plays drums, three fiery renditions of Hendrix classics from the Band of Gypsys’ New Year’s Eve 69/70 concerts (listen to Jimi quote Tchaikovsky’s Nutcracker one minute, then Cream the next), and even very high-spirited out-takes of “Hound Dog,” “Peter Gunn,” and “The Star Spangled Banner.” Most patriotically, Disc Two’s “Calling All The Devil’s Children” even concludes with the Experience’s, um, legendary Goon Show-inspired “party tape” (“What’s your sign?” “Sagittarius.” “Does that mean I can ball you?”) But all play and no work simply wasn’t Jimi’s style:  Just listen to the six truly remarkable demos made in the man’s New York hotel room in the spring of 1968 on his brand new Teac reel-to-reel. The reading of “Tears of Rage,” fresh off Mr. D’s Basement Tapes, plus inaugural one-man recordings of Electric Ladyland’s “1983” and “Long Hot Summer Night” are perhaps on par only with Buddy Holly’s own NYC apartment tapes as glimpses of unquestionable genius-in-bloom. And then, we’re treated to the oft-bootlegged, but until now never as clearly heard, lone guitar-and-voice demo of “Angel” that is, yes, absolutely heavenly. That’s not all! The accompanying Jimi Hendrix: Voodoo Child DVD not only contains ninety minutes of superb performance footage (with audio to match), but even stars no less than Bootsy Collins as, and I quote, “the voice of Jimi Hendrix” as narrator. And, while we’re on the subject, exactly who is that woman holding that great big cat, standing right near Jimi on stage, as he tears “Purple Haze” over the Woodstock mud? Indeed, there still may be much to learn about, and from, the vast amount of rock-altering music Jimi Hendrix left behind during his mere six years as a recording artist. But West Coast Seattle Boy has done more than a good job at sorting the wheat away from the chaff, presenting us with a fine, and finely detailed five-hour-plus overview of the man and his art. So this Christmas shopping season, do beware of imitations. Speaking of which, I see that AMG Hendrix discography now lists 608 titles. And counting…
Posted by Roctober Productions at 6:47 AM