Jimi Hendrix "Hendrix at Winterland," "In the West," "The Dick Cavett Show" 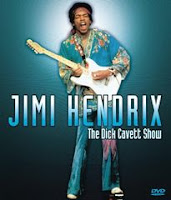 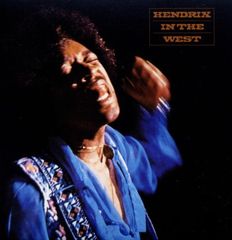 TEN REASONS TO NOW REVISIT “HENDRIX AT WINTERLAND” AND “IN THE WEST”
Guest review by Gary Pig Gold (http://www.legacyrecordings.com/artist/jimi-hendrix/697/)
1.  These original live recordings – totaling 47 tracks over five hours plus – have previously been semi-available only on long-out-of-print releases (not counting quite inferior-sounding bootlegs), and in the case of the Winterland performances now features three (!) full discs of additional material.

2.  The Jimi Hendrix Experience, celebrating both its second anniversary together and the release of their landmark new Electric Ladyland, filled San Francisco's Winterland Ballroom for three nights running in October of 1968. Understandably, after over a solid year on the road, the trio sound a bit frazzled at points, often struggling to keep both in time and in tune …and not just with one another, either. Still, the passages of sheer magic, power, and true resplendence (e.g.: a downright incendiary "Foxey Lady" on Winterland Disc 1) much more than outnumber the odd lyrical or even musical clam.

3.  Meanwhile over with Hendrix In The West, the five additional tracks never heard on its long-ago-killed-by-litigation vinyl edition include a ten-minute "Spanish Castle Magic" which not only interlopes "Sunshine Of Your Love" but even lets the late, extremely great Mitch Mitchell indulge in the kind of tasteful drum solo G. Baker only rarely seemed capable of. Plus, of course, original In The West favorites "Red House" (in what many believe to be its definitive reading), a semi-funk afternoon soundcheck "Blue Suede Shoes," and even "God Save The Queen"/"Sgt. Pepper's Lonely Hearts Club Band" from the Isle of Wight remain intact and are still guaranteed to raise a smile.

4.  The vast majority of these Winterland and West remote recordings were made by the ingenious Wally Heider who, despite the obvious limitations inherent in late-Sixties technology, battled above and beyond the call of duty to completely capture a band as LOUD and, um, unpredictable as Jimi's Experience.

5.  Nevertheless, on-stage equipment gremlins abound throughout the Winterland gigs especially: "Like a Rolling Stone," for example, is prefaced with the warning "I hate to say it, but I just developed about six more broken speakers. So, we'll see what happens," while minutes later an increasingly frustrated Hendrix can be heard muttering "I think I got about four speakers left and about three more valve tubes. And Mitch, he's on his third pair of arms, but fuck it. Hell, I don't give a damn. Let's play it!"

6.  Ever the showman though, Jimi duly instructs one technician "Hey man, give me some real groovy lights. Damn, I'm gonna look like Lena Horne at least!" before tearing into a picture-perfect "Star Spangled Banner" (with the explanation, "You get tired of playing notes sometimes so you get close to playing exactly what you call a true feeling. It's really lost souls in frustration, it seems like to me. I don't know though – we're just messengers. We'll see if we can get this feeling across to you..." Cue a brief excerpt from the Bonanza theme at 2:47 in).

7.  Although Experience bottom end Noel Redding's much-needed back-up vocals (on "Fire" especially) don't seem to have made it onto remote tape until the May, 1969 In The West performances, he does manage to more than pull off a ferociously fuzzed bass solo midway through night number one at Winterland. A few minutes later however, Jefferson Airplane's Jack Casady for some reason replaces him on the Fender Jazz. Then the next night, Virgil Gonsalves from Buddy Miles' band steps up during "Are You Experienced?" with some utterly "6 Was 9" flute flourishes, I kid you not.

8. But the indisputable star throughout was, is, and shall forever remain Hendrix himself, it should go without saying, who does things with and to his six strings which guitarists are still at a loss to explain, let alone emulate. Enough said.

9.  Bonus Points must here be awarded to the Winterland Bonus Disc, which includes a very revealing backstage interview from the Boston Garden prior to the Experience's November 16, '68 appearance there. Jimi playfully disses Frank Zappa, Johnny "Guitar" Watson and even Dave Dee, Dozy, Beaky, Mick and Tich …but does make up for it by citing Muddy Waters, Eddie Cochran and Ritchie Valens (!) as formative influences. Listen very closely too and you'll hear Noel preparing his Fat Mattress somewhere in the background.

10.  And, if you just can't stop, Legacy Recordings has also made available Jimi Hendrix: The Dick Cavett Show on DVD, a complete compendium of Jimi's 1969 appearances on the thinking man's Tonight Show. Although Dick manages to get through both his interviews with Jimi without once mentioning Groucho, he seems only marginally more convinced than fellow guest Robert "Marcus Welby" Young that the Hendrix "Star Spangled Banner" is as "beautiful" as our hero insists it is. Your ears, of course, know better. 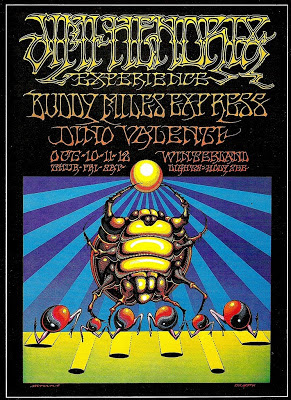 Posted by Roctober Productions at 6:17 AM