The Cave Dwellers “Run Around” 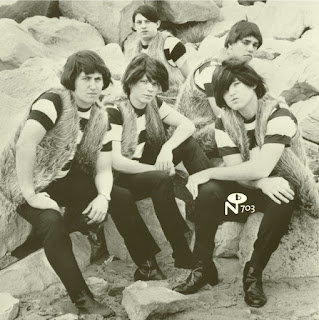 (Numero) This Chicago Beatles-era garage troupe is best known because the b-side of their lush Chicago-pop style single “You Know Why” in the incongruous and insane garage punk meltdown “You Know Why,” which makes the Seeds sound like they should be selling Burpee seeds.(FYI: that’s a reference to gardening supplies that nerdy, ambitious kids bought wholesale out of comic booksin the 60s-80s, to earn pocket money, not some obscure drug reference, though I do hear Burpee Gold is mostly stems and seeds). The second single included in Numero’s new ridiculous hard-cardboard galefold double 7” series takes two unreleased tracks that are less neanderthalic than their heavy ht (or their caveman vests, or their Fred Flinstone-thick manes), but it’s good to remember that longhaired teens liked sappy US pop as much as Beatles and Stones in 1965.
Posted by Roctober Productions at 3:44 AM