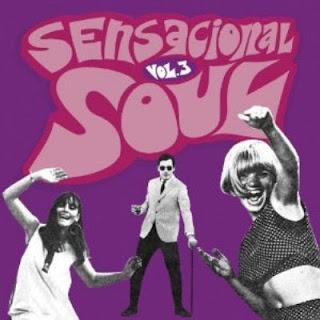 (VampiSoul) Last year two of VampiSoul's most thrilling series hit Junior year, and these upperclassman comps will get you up, without being too classy. Hipshakers continues to be a thrilling romp into the vaults of King/Federal, and unlike the previous two volumes, despite big names here (including Hank Ballard, Ike Turner, Joe Tex, and Little Willie John) I don't think I knew any of these tracks. The playful, invigorating playlist, compiled by WFMU's Mr, Fine Wine, opens with a crazed manic mambo from Cozy Cole and about an hour later pretty much tears down the house with the Mystics doowop demolition job, "The Jumpin' Bean," a pseudo Latin via the Islands via the Twilight Zone masterpiece (there is one more track after it, Red Prysock's slinky "Harem Girl," but that's there for your protection...it's not safe to drive until at least two minutes and twenty nine seconds after getting hopped up on "The Jumping Bean"). In between Linda Hopkins wails over a hypnotizing horn loop, Bill Doggett parodies "cool" while inventing it, and Jimmy Peterson challenges the El Dorados' "At My Front Door" for crazy little doo wopping classic with his "One Buffalo" rocker. This is just F-U-N, and if you can't get behind that F-word, I have some Morrissey solo CDs to sell you.  Available as a CD or as ten 45s! The Sensacional Soul series is a different beast -- I haven't heard any of these sides either, but how could I? I have never been to Spain, and that never includes 1966 through 1976 when these scorchers were released. Los Goya delivers porno funk, Los Albas brings the go go club rock n roll, Larry Wald, in a thick-accented English, sings a creepy groove-rocker about being Superman ("Give you all the super loving that I can...hop inside my phone booth...my little X-ray eyes will see right into you...), Julio Montes brings some soulful detective jazz, Los Bravos cover "It's not Unusual" in front of a Beatles-screaming crowd, The Pipe give the Afro-Laton treatment to "Wade in the Water,"and Johnny Valentino sings a genuinely terrifying groovy love song that sexually assaulted my ears. In other words, "soul" is a pretty lose term here, and these mesmerizing tracks are often as amazing for their strange powers as for their grooves. It's a great double album, that could have been the best single album ever, but I wouldn't know what to cut. The worst tracks on here, like Valentino's violation, are also the ones I played fifty times in a row just so I could believe they existed. Spanish nuts were always my favorite snack, and here they are a whole meal!
Posted by Roctober Productions at 6:11 AM