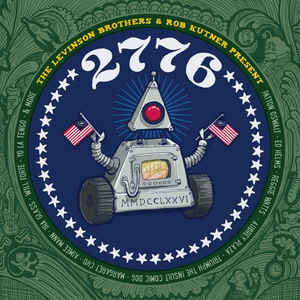 (www.2776.us, 2014) Reggie Watts frustrated that his time-travelling buddies Right Said Fred refuse to travel anywhere but 1991 (where they meet a rapping Blossom), Triumph at his ethnic joke insulting best Music Man-singing over riffs by a slumming Rebirth Brass Band, antoher 60s comedy LP-style bit has Jonathan Katz reviving his Dr. Katz character while Maria Bamford does her crazy voice character stuff acting out a marriage counseling session between the Union and the Confederacy. Even the relatively unfunny Nina Totenberg-helmed NPR-style report on a future Supreme Court ruling regarding rock n roll delivered this zinger: “Ruth Laser GinsBorg.” And funny or not (and it was kinda funny) I will never complain about a Bbcat Goldthwait/Sally Timms duet

Posted by Roctober Productions at 10:55 AM