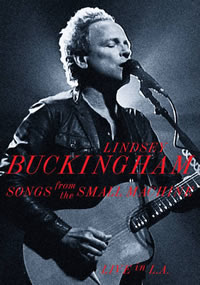 (Eagle Rock, 2011) For all intents and purposes, Lindsey Adams Buckingham has lived a charmed life.

Raised in the comfy Bay Area opulence of 1950's Atherton, California, a handsome, athletic golden boy suddenly and forever sidetracked by his elder brother's Elvis and Buddy 45s. He quit the school water polo team, transferred with his guitar into a local hotshot band called Fritz, left for L.A. with their singer Stevie, produced with her the magnificently stunted Buckingham Nicks album, was soon after asked to join Fleetwood Mac with whom he helped craft a 40-million-plus-selling album called Rumours and, by 1978 at the age of twenty-nine finally found himself at the very tip-top of his game.

For all intents and purposes, that is.

But Lindsey's next creation was a great big deluxe Christmastime four-vinyl-sider called Tusk. It was, to hijack a young Neil analogy, the sound of a band steering off the well-beaten MOR and heading straight for that ditch. Costing over a million dollars to make then selling less than a fifth of what Rumours had, the anticipated blockbuster was considered a failure, and its prime architect was to take the blame – and the fall, only reluctantly being allowed to occupy the Big Mac driver's seat ever again.

Of course as we can all plainly see, and even more easily hear from a 21st Century perspective especially, Tuskwas in fact only the kind of "failure" Pet Sounds or Around The World In A Day had been for their respective resident genii. Realizing as much before most everyone else had however, Lindsey promptly struck fully out on his own with a grand little album called Law and Order in 1981 and has ever since led a kind of dual musical life, dividing his time between solo projects and Fleetwood Mac "reunions." Or, as he himself calls it, the "small machine" and the "large machine."

Obviously it's the former on joyous display throughout Eagle Rock's Songs From The Small Machine: Live In L.A., a two-hour-plus, 19-song DVD of the show Lindsey and his compact combo toured with in support of the Seeds We Sow album.

I had the pleasure of attending both a recent concert of Lindsey's, and even more enjoyably – and quite revealingly – an intimate lecture/performance held in New York City's 92nd Street Y, I kid you not. Both settings showed a man who in many ways remains the awestruck kid who long ago checked into Heartbreak Hotel with Peggy Sue. Or, as he himself explains by way of introducing Live In L.A.'s "Trouble," "Before there was a band, before there was any commercial success, before there was songwriting, production, there was a boy listening to his older brother's records and teaching himself to play guitar. I guess as I evolve and mature as an artist, one of the things that I come to appreciate is that you must look for what is essential. You must look for the center. And, for me, it becomes increasingly apparent that that center is, and has been, the guitar."

Lindsey of course, like most things he does both on stage and off, never fears to play his guitar in vividly wild extremes. The five-song, totally LB-only prelude which opens his show not surprisingly finds Lindsey delicately whispering upon his fretboard one moment, then thrashing his instrument like a deranged, prancing ostrich the next (an engagingly terrifying contrast he often brings to his songwriting itself; witness "That's The Way Love Goes" later on in the set). Remember, though, that this is a man who in another time and place dared follow "Never Going Back Again" with "The Ledge."

He is also a man who considers himself more a song stylist than a song writer; a subtle but meaningful distinction perfectly illustrated at Lindsey's recent Y lecture as he performed an utterly sublime version of the Rolling Stones' "I Am Waiting." As the man explained, that song, along with "She Smiled Sweetly" (the final track on Seeds We Sow) represent to him the Stones at their absolute creative peak under the guidance of the brilliant Mister Jones who, like Lindsey, specialized in styling a song with exotic musical and tonal textures. Lessons, no doubt learned early by the young Buckingham via Aftermath and Between the Buttons, which remain apparent throughout the man's recorded work to this day.

Conversely on the concert stage however, it's Lindsey's "small machine" (as in bass/keyboardist Brett Tuggle, guitarist Neale Heywood, and drummist Walfredo Reyes "the groovin' Cuban" Jr.) who are relied upon to provide perfect instrumental/vocal accompaniment, be it by channeling Brian Wilson and his Friends during "All My Sorrows," the Quiet Beatle's "I Need You" A-chord for "Turn It On" …or simply by getting wisely out of the way as their fearless leader's four-and-a-half-minute (yikes) guitar solo plows "I'm So Afraid" to its logical concussion.

All four guys also treat the crowd-pleasin' classics "Tusk" (just as delightfully silly as ever – even without USC's Marching Trojans) and "Second Hand News" (what better way to salute Buddy Holly's anniversary?!) with due respect yet renewed enthusiasm. But, say what they often will about that large machine, the small one still must rely upon the Big M's "Go Your Own Way" to get the asses filling Beverly Hills' Saban Theatre completely erect as this particular show, and DVD, draws to a close. It is my prediction that as Fleetwood Mac tours become less frequent in years to come, Lindsey will lean more and more heavily upon his long-ago work with the large machine to ensure a feasible small-m touring career. I mean, even Sir P McC more or less performs nothing more than a Beatles tribute show nowadays, doesn't he?

"For myself, I know that I have made quite a few bold choices," Lindsey says introducing "Seeds We Sow" Live In L.A. "Choices that were not always popular. But I think time does have a way of revealing things." Songs From The Small Machine surely reveals one adult child still reflecting upon his brother's record collection but still active, still flourishing and still reveling in the now. And still painting from, as he likes to call it, the far left side of his palette. The days of forty, or even four-million-selling albums may be long gone for one and all. But you just watch, and listen: I bet Lindsey outruns, and outlasts, them all.

After all, that's still how they do it in L.A.

Posted by Roctober Productions at 7:19 AM