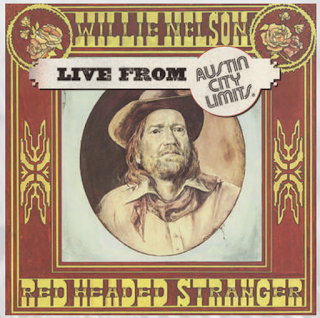 (Columbia/Austin City Limits, 2020) This album sees Willie and his amazing Bicentennial band (featuring Sister Bobby on piano, and, of course, Paul English on drums [whom Willie introduces as "The Devi]) performing the Red Headed Stranger LP in sequential order, in its entirety (in case you thought full album shows were a recent destination festival innovation). Because this was shot for the Austin City Limits TV show the sound is pristine, and other than an explosion of applause at the opening notes of "Blue Eyes Crying In The Rain," the audience is not an audible presence for the most part. But even if this was mic'ed differently, you wouldn't hear much crowd noise. Unlike live recordings from a decade earlier when Willie was clowning and making show like the Nashville heroes he was writing for and playing with, the Willie who wrote, recorded, and is playing on this album has found his own voice (even when interpreting other songwriters). He believes in these songs, and these arrangements, and this album, so much that his performance has him concentrating and contemplating the music, while presenting intimate, personal renditions that the audience is receiving with equal reverence. There are so many live Willie LPs, and a lot of them are very good, but I can definitely say that this none sound like this one, and any Willie fan (which I assume is everyone) would do themselves a favor by cozying up to this Stranger.
Posted by Roctober Productions at 9:41 PM