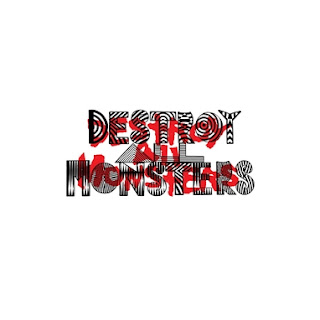 (Munster, 2014) I guess because Mike Kelley not only became an art star (whose dolls on tables I saw transform numerous galleries into spooky flea markets), or maybe it's because I have actually seen their videos and visual art as literal art installations in galleries, but Detroit's influential weirdos Destroy All Monsters have long been the definitive Art rRock band in my mind. Which I now realize is not fair. In my universe there's a whiff of pejorative to that term, while there is nothing but magic emanating from such soothing subgenres as Monster Rock, Trash Punk, Psyche Noise, and Imaginary Horror Movie Soundtrack-core, all of which I realize are far more suitable cate-gore-ization safter immersing myself in this epic collection. Formed in the early 70s by Ann Arbor college misfits/comic book fans/noisemakers, eking through the mid-70s making messy explosions of creativity, then changing up personnel going into the 80s as the charismatic frontwoman/visual artist Niagra recorded and toured most that decade with various lineups featuring herself and Ron Asheton of the Stooges, as anchors. They reunited in the mid-90s and played reunion shows and released recordings until Asheton died in 2009. This collection is mostly dynamic, joyously chaotic, fully rocking live material from all eras of the band (some from the huge Thurston Moore-curated release from 2009, some taken from reunion show videos). Niagra's paintings and the band's art zine (of the same name) and the museum exhibits certainly mean this band earned that A-word, but listening to two hours or righteously ridiculous rock'n'roll messes means they don't have to wear any of the respectability or bullshit associated with that scarlet letter. Thank the Devil that despite being officially curated into institutions, they were, fundamentally, a gruesome 1950s horror comic of a rock band!
Posted by Roctober Productions at 8:17 AM