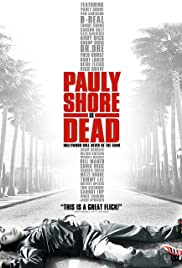 (LandingPatch Productions, 2003) This movie is so painfully unfunny that it makes me like Pauly Shore more, out of sympathy. To grow up surrounded by comedians and have humor be a cryptic foreign language is a tough cross to bear. In this movie Pauly fakes his death to help his career, and along the way coerces scores of his pals to do cameos (including one dead one, via an impressionist). Runner Up for winning the movie is Adam Sandler who makes Stiller and Sheen and Durst and Mini Me look like chumps for feeling obligated to film their scenes, as Adam only appears as a disembodied voice (Pauly writes a scene where a prison janitor mistakes Pauly for Sandler, which seems like a stretch --- Rob Schneider I woulda believed). In addition to fantasizing that he is Sandler-esque, Shore also imagines that Black people really like him, as it opens with Ja Rule being the only one on earth that digs his TV show, and later features a painful scene of him winning over a Black prison yard clique with repetitions of the N-word. The top performer in the movie is Todd Bridges who decides to play his role as a Koran-reading prison veteran straight and earns his dignity, his props for good acting, and a Redd Foxx doll. Actually, the Redd Foxx doll was the MVP.
Posted by Roctober Productions at 8:18 PM