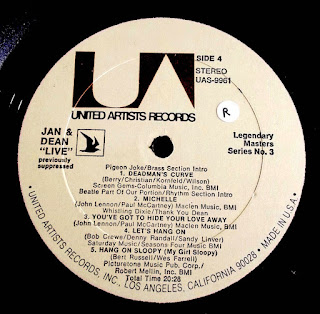 
There’s Brian Wilson and his B.Boys, most obviously. Then there were Crosby, Stills, Nash and sometimes even Young, the Eagles, and my own personal favorite Turtles, Byrds, Mothers of Invention and possibly even Runaways. Not to mention Lindsey Buckingham’s Big Mac.

However, whenever the songs and stories of California are sung and strung, one name – one very important name – is most often left out. A man who, beginning in the late 1950s with a bank of audio equipment in his Bel Air garage actually invented, or at least kick-started, the entire Los Angeles independent rock scene. By writing and performing songs in his home studio which, taken into the Hollywood recording studios proper were meticulously crafted into bonafide hit records back when young Wilsons, for example, were still getting in trouble for staying out after the street lights went on at night.

The man I speak of is William Jan Berry; a singer, songwriter, arranger, producer, actor, promoter best remembered as one half of that certifiably zany (e.g.: vinyl Side 4 of The Jan & Dean Anthology Album!!) albeit boldly pioneering SoCal rock duo Jan & Dean.

By adding their Pacific-blonde good looks to East Coast doo-wop hooks, the records Jan and his highschool pal Dean Torrence made not only formed the vocal template for all surf-rock to come (starting right from the start with the “bom, bomp dip-de-dit”s of that very first Beach Boy song) but in their production employed various members of what came to be known as the Wrecking Crew when Jan’s sessions outgrew his garage and moved into Western, United, and the other fabled studios Uncle Phil, most notably, would later build his Walls of Sound within.

Yes: but before Spector, there was Berry. And before “I Get Around,” “Good Vibrations” and [gulp] “Kokomo” there was a sun-kissed little classic called “Surf City” which, with Jan’s assistance, gave co-writer Brian Wilson his very first Number One record back in the Summer of ’63.

The string of hits Jan went on to write and produce throughout the mid-Sixties, with their double-drum attack welded to lush orchestrations were, and remain, just about the best records ever to come out of El Lay. Credit for innovations both technical and musical which continue to go Spector’s and Wilson’s way – with the latter’s Pet Sounds most often cited – again are more than evident in Jan Berry records from years earlier. Most unfortunately however, an utterly debilitating road accident in April of 1966 (just down the road from J&D’s “Dead Man’s Curve”) kept Jan out of peak action for much of the rest of his life and career. Although brought back to the public’s attention via a 1978 made-for-TV biopic, the titanic twosome’s hit-making days never returned, though they continued to keep countless thousands of concert-goers throughout America well-versed beneath waves of harmonious California Myth until Jan’s death in 2004.

Thankfully, one man above all is helping keep his life and legacy, both on record and off, alive and well: Mark A. Moore’s landmark Jan & Dean Record (McFarland, 2016) remains the reference book on all things Jan, in the process recounting the very birth and growth of the Los Angeles rock industry.

Mark’s new biography, titled Dead Man’s Curve: The Rock ‘n’ Roll Life of Jan Berry is due out this summer. It can be pre-ordered through Amazon or publisher McFarland. You can view the Table of Contents on the author’s website, and watch the book’s promo video on YouTube.

Meanwhile, all Roctoberites are also urged to dive deep into my extensive interview with Mark and all things J&D which appears in Issue # 2 of Vulcher Magazine. What better way then to recognize, salute, and roundly honor Jan Berry on what would have been – what should have been – his 80th (!) birthday this April 3rd. 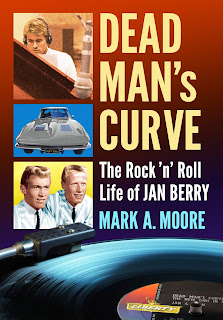 Posted by Roctober Productions at 8:03 AM