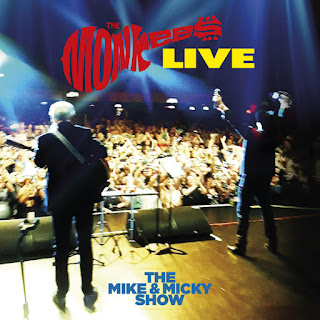 (Rhino, 2020) I didn't have $250 for a ticket to see this tour when it came through Chicago, so it's nice to have this and hear what I missed. Strangely billed as "The first official live Monkees album" (as if Rhino's own "Monkees Live 1967” doesn't count), the two surviving Monkees, Mike Nesmith and Mickey Dolenz, offer an enjoyable array of hits and "deep cuts" from the Monkees' back catalogue that are sure to please longtime fans and newcomers alike. The fact that their voices are still strong, and they are supported by a crackerjack band should surprise absolutely no one. Nesmith shines on "Sunny Girlfriend," ''The Door Into Summer," and "Tapioca Tundra," while Dolenz does his thing, and does it well, on tracks like "Mary, Mary,” "For Pete's Sake," and "Randy Scouse Git.'' Other standouts include the psychedelicized "Sweet Young Thing" and the more recent "Death of an Accidental Hipster,'' plus solid raveups of "Circle Sky,” "Goin' Down," and “I'm Not Your Stepping Stone." The camaraderie between the two Monkee men is sincere and infectious. The music is given the respect it deserves (producer, Andrew Sandoval is largely responsible for making the Monkees take stock in themselves and elevated them from Oldies status to elder statesmen of Rock), and you can feel the joy and elation of the crowd. A dedication to Davy Jones and Peter Tork is real class, and they're there in spirit. The Monkees have always been about having a good time, and the spirit of fun remains intact, all these years later.
Posted by Roctober Productions at 8:43 PM