Adam Quesnell “Can We Afford This Much Despair” 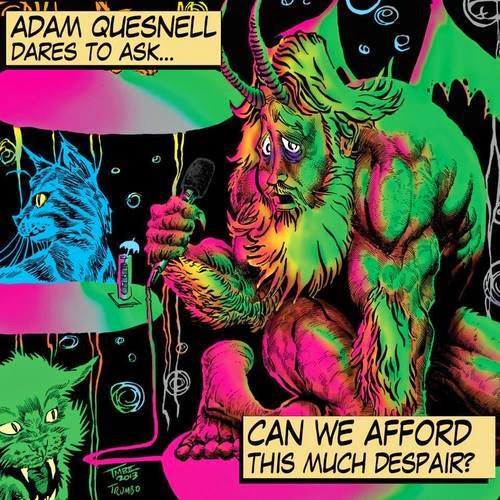 (Stand Up) As this album reveals itself/introduces us to Adam, there are some things that might seem like warning flags. The emcee mispronounces his name. The amount of office day job jokes calls into question how much road/comedy experience he might have under his belt. And it is mentioned, and made clear, that this album is being recorded at a sci fi convention. But you know what? Fuck flags! This humanoid kills it! The most wickedly devious April Fools-related gag is recounted, African genocide is mined into comedy gold, and financial debt-based fucking is broken down to its saddest subparticles. Quesnell clearly watched a lot of cable in the 80s and 90s growing up, and science shows, nature shows, and after school specials may not have educated and guided him as well as HBO and Discovery Channel’s consultants may have hoped, but they sure made him a sharp, funny, self-depreciaiting (yet confident) comic. Yay cable! And boo Mr. Emcee who also ends the album by thanking Adam Quedell!
Posted by Roctober Productions at 3:10 AM