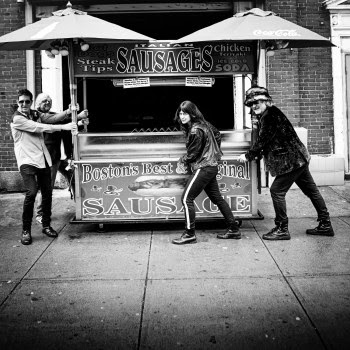 (Yep Roc) The third inning of baseball-themed rock ‘n’ roll from this all baseball all the time all-star side project is what you would call, in baseball parlance, a quality start. What’s special about these songs is that they aren’t just baseball themed, they are hard wired for the kind of Baseball Almanac, Sabremetrics, emotional-weight-of-your-dad-having-a-catch-with-you craziness that leads to baseball fans embracing historic and mathematic and esoteric specificity. But because it’s pop music, anyone could still dig it! The Lenny Dykstra song is a perfect example, as it seemingly contains way to much ultra specific information about what teams he played for, and his best seasons, and his side businesses, and his baseball talents, and his failed comeback, and his prison activities, yet it’s so catchy, and the chorus hook is so genuinely good (“I lived in a mansion, I lived in a car/You got to fly high to fall this far) that this is absolutely a functional pop song that everyone should groove on. And they are willing to take risks, thematically if not musically: they have a shockingly sympathetic song about the steroid-abusing A-Rod tempting fate by wearing unlucky number 13. And though they are sonic crowd pleasers, these aren’t musically simple songs: the tune about the day Pasqual Perez earned the nickname “perimeter” by being late because he couldn’t find the exit to the park manages to be bouncy, yet simultaneously somber. And there is a magnificent chord change in their ode to Larry Yount (whose Major League career ended before it began when he was injured warming up for what would have been his big league debut), to invoke their subject’s mixed sense of pride and jealousy he feels at a family gathering as his kids beg their Uncle Robin for glory day stories. I guess the main point is that baseball is great and everyone who loves baseball should understand that and love this, for as The Baseball Project explain musically, even Steve Howe, Sammy Sosa, Ty Cobb, the 1919 Black Sox, and John Rocker deserve love despite their personal and professional shortcomings, for one important reason, sung with hope and reverence: “They played baseball.”
Posted by Roctober Productions at 5:48 AM