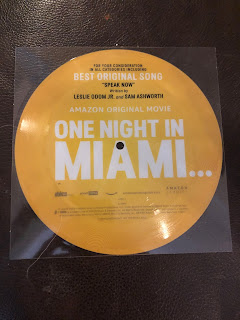 (ABKCO/Amazon Studios, 2021) As the revival of vinyl (or "vinyls" as they are often oddly called these days) and record players and Record Store Days continues I am constantly trying to figure out what signs point to the supreme audio format being here to stay, or, alternately, having jumped the shark and headed towards the way of the Zune. Well if ever I was surprised and confounded and unsure what signs pointed where, it was when the new issue of Variety featured a promotional flexi disc rubber cemented into the magazine to promote this tune from "One Night In Miami..." (the drama about Sam Cooke, Malcolm X, Muhammad Ali, and Jim Brown having a deep hang in 1963) for best original song Oscar. A flexi stuck in a magazine like it was a 60s National Geographic,  a 70s MAD special, or an 80s pop magazine?!? When Eva-Tone went out of business 20 years ago I thought flexis were done forever, but someone took up the production mantle and now this craziness is happening...what's next...BTS records glued to cereal boxes? I am 99.9% sure this flexi has a bunch of fake surface noise/audio pops put in the mix, to go along with the period theme of the movie (there is a .1% chance the magazine rubbed up on it and that the new manufacturer of flexis now makes them in a manner that makes pops possible). It also is either pressed on, or adhered to, a heavier plastic than most classic flexis, and the hole was a little small, but that made for a snug fit and it played fine. As far as the song, well Sam Cooke wouldn't have lost any sleep if Bobby Womack released this opposite one of his singles, but Odom can sing, and if you think I'm rooting against Regina and her four Kings you are crazy. I hope this does win an Oscar, and that the statuette they hoist has a flexi attached to his shiny bottom featuring selections from Sam Cooke at the Copa, The Adventures of Ali vs. Mr. Tooth Decay, Message to the Grass Roots, and Jim Brown Tells It Like It Is. 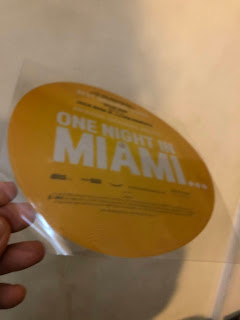 Posted by Roctober Productions at 5:24 AM