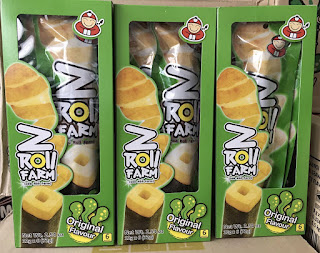 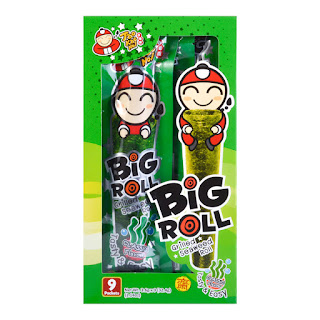 (Taekaenoi, mfd 8/20, exp 8/21) I am not sure exactly what this Thai snack is. The first one I bought was just a piece of rigid rolled up seaweed, soaked in something sweet. The cone/tube formed a cavern that was confoundingly empty, so I thought maybe this was the snack equivalent of some kind of zen koan for me to ponder as I snacked, but considering the prominent "Central Islamic Council of Thailand" stamp on the back I dismissed that.  Instead I went back and bought a variant that had a picture of something inside. Since the "Z" in the name is parenthetically rollspained to mean "sea" on the wrapper, I expected something fishy, but the giant self-peeling potato graphic suggested a spud theme. However, the spotted green, phallic/horror movie creature graphic declaring "Original Flavour" threw that easy explanation off. The ingredient list suggests this it is a seaweed wrapped, meat and fish-free potato/corn grit hydrid chip ziggurat flavo(u)red with sugar, mushrooms, soy sauce and liquid smoke. But the sticker attached next to the ingredients declaring "California Proposition 65 WARNING Cancer and Reproductive Harm" made me stop analyzing the wrapper and just enjoy this sweet, crunchy, mysterious, dangerous goodness. I like it. And I've lived long enough and am not pregnant, so will continue to risk it.
Posted by Roctober Productions at 7:12 AM