Mothers Of Invention “We’re Only In It For The Money” 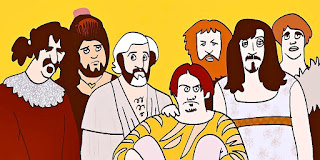 The first Friday of most every month throughout 1967 and into ’68, I was formally excused from school so that my mother could take me all the way into Toronto for orthodontic appointments. As my due reward afterwards, I would be treated to a tasty french-fry-and-chocolate-milk lunch in the sumptuous Eaton’s Department Store cafeteria, then left for an hour alone in the adjacent Music Department while dear mom ran her errands elsewhere.

Gawd, I truly was deep in pre-teen heaven in there, believe you me:  Guitars – just like the one Tommy Smothers played on TV every week! – lining each wall, while right over there were more record albums gathered alphabetically together in one place than my wide young eyes had ever ever seen.

But it was while methodically flipping through that “Misc. M” bin one innocent Friday in search of the latest Monkees long-player that I came across an image which shook me to the very core of my hitherto safe, sound, Micky’n’Mike-loving spine:

A foreboding, dark purple sci-fi sky shot through with lightning bolts, beneath which were strewn an above-motley crew of comic-book cut-outs – some of whose eyes were obscured with sinister black bars! And in front of all that stood what appeared to be a group of bearded, ugly, definitely NON-Monkee-looking men wearing… wearing dresses and standing by a mess of rotten vegetables which for some reason spelled out the word “mothers.”

Subconsciously at least, I recognized this was sort of, for some reason, like the picture on front of my latest Beatle album. But I also instinctively gathered something BAD was afoot.

So for the next several months, as if revisiting a decaying body rotting in the back woods, I’d patiently let Dr. Shanks, D.D.S. rip around my mouth, rush with Mom to scarf down some Eaton’s fast-food, then creep back towards those record racks to check if …IT… was still hidden there. Why, one grave Friday I even showed the offending, but somehow alluring record jacket to my mother …who, immediately sensing things untoward indeed, said “put that down, Gary. We’re going home.”

Flash forward a couple’a years:  By now, my comparatively straight teeth and I were enrolled in the local high school, specializing in Fine Arts and pouring over my latest charcoal still-life when the most incredible music suddenly burst from the record player at the back of the room. It was Eric Shelkey’s turn to bring vinyl in to accompany the day’s lesson y’see, and Eric, being by far the most freeeky, out-there student in all our Grade 9 Specialty Art class – I mean, the guy wore little round eyeglasses just like John Lennon, and his hair actually reached below his shirt collar! – certainly did not disappoint with his choice of music. Yep, instead of the usual docile strains of Tommy Roe or, at “worst,” Blood Sweat and Tears, the room was this morning filled with fully-stereophonic snorks, wheezes, electronic noises (much like those the microphone made in the auditorium downstairs when it wasn’t working), and some creepy voice which kept whispering “Are you hung up?” over and over again.

Understandably I suppose, just like my mother had back in Eaton’s music department, our hitherto pretty patient art instructor Mr. Pollard walked quickly to the back of the classroom, turned the volume all the way down, removed the offending twelve inches from the turntable, inserted it back in its sleeve, and told Eric he could pick his record up after class, thankyouverymuchnowpleasegetbacktoworkeveryone. Of course, me being me, I made sure to follow Eric out into the hall afterwards to ascertain the name labeled in the middle of this wondrous, forbidden twelve inches. Most obligingly indeed – but being careful to check both ways first to see if anyone was looking – he pulled the album slowly from his portfolio case.

AND THERE IT WAS. That same diabolical image which had haunted my post-orthodontic Fridays all those years ago!

Winking at me most conspiratorially, Eric invited me over to his place to listen to the entire record that day immediately after school. In fact, we even tried calling the telephone number which preceded “Bow Tie Daddy”! Then, I naturally saved up my allowance and bought my OWN copy a couple of months later, locked myself in my room… and it would be quite some time until I ever listened to Pisces, Aquarius, Capricorn and Jones Ltd. – or anything else, for that matter – quite the same way ever again.

We’re Only In It For The Money was released 53 (!) years ago this month. I couldn’t say it then, but I surely will now:

Posted by Roctober Productions at 5:18 AM