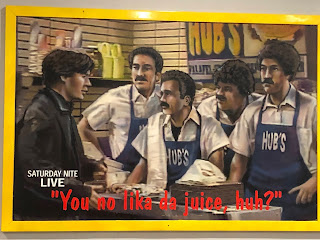 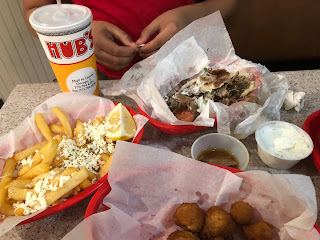 GUEST REVIEW BY JAKE AUSTEN
(Real Life, 2021, NBC, 1993) In 1993 Robert Smigel created a skit for Saturday Night Live that recalled his days in Chicago and paid tribute to the 1970s Billy Goat Tavern "No Pepsi, Coke" sketches. It remains a minor classic for three great reasons: it is a relatively memorable sketch (Rob Schneider's "You like-a the juice" is a good enough catch phrase); it features an all star lineup being silly in a classic way (Sandler, Schneider, Farley [with Superfan-era Smigel thrown in] in dumb mustaches with dumb accents); and it's meta-ending, where they admit the sketch is too long and pointless was notable. They also wisely only did it twice, to my knowledge, the weaker second version involving a visit to Mt. Olympus to get more gyros juice (Kevin Kline cannot get the timing of the catchphrase down, and ,insanely, they forego using the line, "You like-a the Zeus?"). Anyhoo, last night my son and I went to actual Hubs, in part to see the ugly weird paintings of the sketch (of which they oddly chose to quote the second sketch, in which the rancid juice necessitates the Mt. Olympus trip meaning comedy legends are immortalized saying customers "no lika da juice" at Hubs, instead of the original sketch's endorsement of their product). We also ate everything they mention in the sketches, including an OK gyros sandwich (certainly not the most flavorful in town), some fine fried mushrooms, solid french fries, and of course, extra juice. And, of course, in my experience, there is no such thing as extra juice that anyone serves with gyros, only with Italian Beef, so we were dipping gyros in au jus and it was great. The Olympics (not from Greece this year, but still Greece-centric in theory) were on and the USA had a track triumph. I like-a the experience!
Posted by Roctober Productions at 7:52 AM