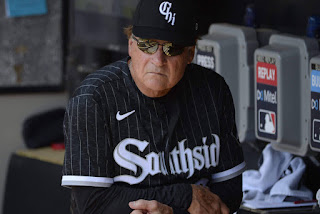 (whitesox.com) People really wanted to hate Tony La Russa when he got hired to manage the White Sox, mainly because he is old as hell. That seems like a shitty reason to dismiss him. He definitely drove drunk at least once and he certainly did not stop some of his players from steroid-ing up in the late 80s/early 90s, though no one else did, either. That his players took more seems immaterial. Some folks think he is racist, which he may be, who knows, and the thing he has done this year that I hate the most is using the "no racist bone" line is a presser. Don't invent a bone to defend yourself! But to me the loudest critiques when he was hired seemed to be super racist. How could young Black players like Tim Anderson relate to this old White man?, many asked. As if Anderson (at the time the only American-born Black player on the roster, La Russa has added and regularly played two more) was some kind of undisciplined hip hop wildman that did not know what a coach was. Anderson has the highest batting average in the league since 2019 and is as disciplined and mature as anyone; wearing nice sneakers and listening to hip hop does not change that. The two things the White Sox, with all their talent, needed in a manager was a Spanish speaker (check) and someone who would not fuck things up. I guess La Russa possibly lost one game this year because he (and many others) did not know a new complicated rule for extra inning ghost runner substitutions in the case of a pitcher being placed on 2nd automatically to start the 10th. People also act like he ruined Yermin Mercedes because he criticized him for something not unreasonable (nor was Yermin doing something unreasonable humiliating a fake pitcher with a big homer). Well, the Sox won April because La Russa put Yermin as an opening day starter when no other manager in the league woulda done that. The team had a bizarrely challenging injury onslaught this season and La Russa has helped some ragtag lineups win a lot of games, so I'm all in. Just take Ubers when you drink and don't say anything racist out loud and you are a Hall of Famer baseball person in my book.
Posted by Roctober Productions at 10:11 AM